With cancellation of Hometown Hockey by Rogers, Prince Rupert joins a select group of communities to have played host to the popular travelling hockey carnival

The decision last week by Rogers Broadcasting to bring an end to their long running hockey program Hometown Hockey has become a bit of a trending topic on social media in the last few days.
That mainly to the farewell to the program and those communities that were visited from Tara Slone through twitter, who shared a few memories for her and  Ron McLean from the weekly trip to the hockey hinterlands to tell the stories of the sport that binds a nation together.

One of those 160 whistle stops on the Hometown Hockey tour was Prince Rupert, which now joins a very select group of communities to have hosted the hockey carnival for a weekend.
Our moment in the National spotlight came in December of 2019 and the arrival of the Rogers HomeTown Hockey prep crew which was just like a carnival arrival, the tractor trailers pulling in a few days before the opening, the stars of the broadcast arriving closer to showtime.
The event one which brought the entire community and region together in celebration of sport and community, and as events would follow just a month later, one which would mark one of the last large public events prior to our COVID tribulations that would follow.
That weekend of December 6-8, 2019 one full of fun family activities and some national exposure for the hometown team the Prince Rupert Rampage, who opened up the national broadcast with a memorable video clip.
Along with the travelogue for the city that the program provided for, the local hockey talent and hockey program got a shout out that weekend as well, with two from the PRMHA in the spotlight from the nation wide broadcast show.
Among those sharing their own stories from across Canada is former Northern View reporter Alex Kurial, now working out of Bowen Island, who made note of the Hometown Hockey stop in Prince Rupert and the impact that the visit had for him. 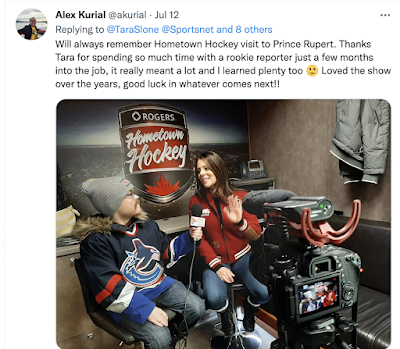 You can scroll through the commentary here, to see how much the visit meant to communities across the nation during the Hometown Hockey run which began in 2014-15, maybe add a few of your own if there's something you would like to share as well.
A look back at Prince Rupert's moments with Tara and Ron and the crew can be reviewed from our archive page of the time.
Posted by . at 10:47 AM