Like the flow of gas, the flow of information on the PNG gas line situation has been limited from many official sources


For any updates on situation, see bottom of this page.

The first word that there may be some kind of issue to be aware of with the natural gas pipeline between Prince Rupert and Terrace came shortly after 11:30 yesterday, when word began to filter out of reduced pressure issues through a couple of media options on the North Coast.

The main theme of those stories to the effect that Pacific Northern Gas having experienced a pressure drop in the line on Wednesday evening, was requesting that Prince Rupert and Port Edward residents reduce their use of natural gas to a minimum, that while the gas company workers could investigate the situation further.

The short notes from radio and newspaper options which included a number to call made for the bulk of the advisory, leaving those that might be looking for a bit more detail into the situation to find it lacking from any official information portal.

For their part, the gas company itself made little mention of it on their corporate website, other than a short flash  message that would appear when someone logged onto the site. 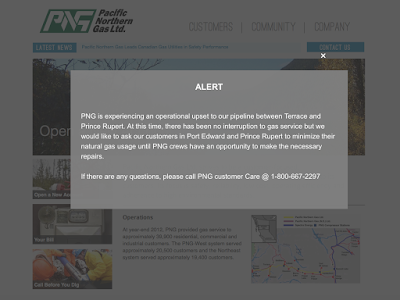 A quick look over to see what they have to offer, finds that the most recent item of note appears as part of the "Latest News feature" coming from  October of 2016.

Likewise, the City of Prince Rupert, which would be responsible for providing for  a local response to any gas outage affecting residents (something that the City has had experience with in the past), also has had little to advise its residents on the situation so far.

With no updates to share with the public provided to the City website, or through many of their social media options that city staff are responsible for. 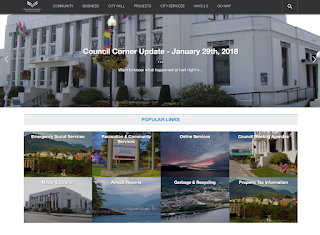 Not even Mayor Brain's civic focused Facebook page made mention of the PNG situation, an unusual thing for the municipal official who is often engaged on that platform on any number of topics, some of which might be considered of lesser importance than a potential issue with concerns related to the gas line to the region.

Fortunately for the moment, the gas continues to flow, though residents are still advised to conserve the supply by reducing their use of the service, though any kind of timeline as to when the full service may be returned so far has not been released by the gas company.

Much was made of how the City handled the recent Tsunami Alert event, which featured a string of messages for the public in the overnight period, even if no one was awake, or more importantly aware of the city's efforts in advising what the ongoing emergency situation might have been.

Offered another chance to share information on another situation, which while not as immediate as a Tsunami alert, is one that still would be of some importance to residents of the region, the City seems to have let an opportunity to let their communication skills shines slip by, with no official word on the gas line situation.

With a review planned for how the Tsunami response was handled, City Council might want to expand their review of how they handle their communication issues and give some thought to adding notices such as the ongoing gas line situation to their flow of important information for residents.

More background on City Council Discussion topics can be found on our Council archive page here.


Update: The City of Prince Rupert posted a short advisory to the situation on the City website later Friday morning

PNG Update Friday, February 9, evening -- Work will continue on the line between Terrace and Prince Rupert through the weekend, though PNG officials continue to urge residents of Prince Rupert and Port Edward to reduce their consumption during the repair period.

While there is no outage at this point, the company continues to make efforts to avoid one and advise that they have back up plans in mind should the repairs take longer than expected.

Update 2: PNG Update Monday, February 12 --  Officials from Pacific Northern Gas advise that repairs have been completed on the line between Prince Rupert and Terrace, and thanked residents of Prince Rupert and Port Edward for their cooperation and reduction of use during the situation. 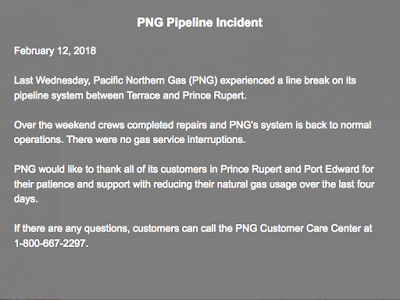 To return to the most recent blog posting of the day, click here.
Posted by . at 9:22 AM

Email ThisBlogThis!Share to TwitterShare to FacebookShare to Pinterest
Labels: The flow of gas reduced as is information on it