Port's partners get chance for notice at Vancouver Logistics convention 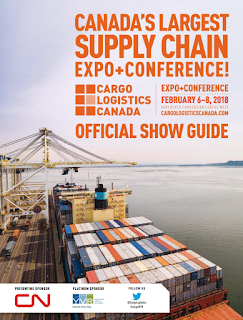 A major logistics convention has just wrapped up in Vancouver and judging by the stream of information coming through the event's twitter feed, the Port of Prince Rupert and some of its industrial partners received a fair share of attention over the course of the three day event.

The Cargo Logistics Canada Expo-Conference, billed by organizers as North America's largest multi modal expo and conference, brought Port, shipping and transportation officials together at the Vancouver Convention Centre from February 6 to 8.

The three day conference featured a wide range of information sessions, presentations, speeches and exhibits many of which served to highlight the growing pace of global trade that is found in British Columbia.

Among some of the themes explored were:

The changing pace of technology and how it will impact on port operations and logistics services across the nation.

The creation of Warehouse Distribution Centres and how they will impact on transportation and its supply chain requirements.

Some of the other topics included retaining employees in a competitive industry, trends and changes in the shipping industry and how Canada and US can address trade issues in a border less world.

In addition to the Break Out sessions, panel discussions and updates on new trends, participants also had an opportunity to take in a number of speeches and presentations from a list of guest speakers over the three days in Vancouver.

Those in attendance also had the opportunity to network at the convention, as well as to explore the range of exhibits that made for the Expo portion of the event, with the Port of Prince Rupert hosting a booth in the Exhibition Hall to share details of what the Port has to offer today and what is planned for the future.

You can review the full Calendar of events for the convention here.

Shipping options through the North Coast were also featured as part of what was called a Case Study on Prince Rupert.

A session set aside for Thursday to explore themes on export trans load efforts, with the new Ray-Mont Logistics container stuffing facility on Ridley Island the focus for one panel discussion.

As part of that overview of the newest facility on the Prince Rupert waterfront, representatives from CN Rail participated in the discussion that examined on how the shipping chain works into the Port of Prince Rupert. 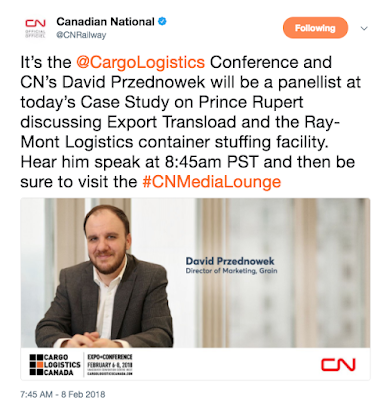 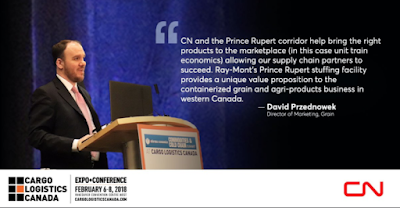 The Port of Prince Rupert's Shaun Stevenson participated in that panel discussion as well,  expanding on the background as to how the facility came to the Northwest, with the discussion reviewing some of the key factors that led to the decision by Ray-Mont to expand their operations to the North Coast. 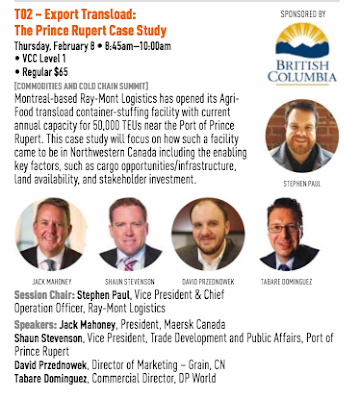 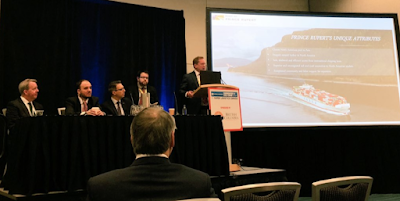 And while it most likely didn't make for discussion as part of the break out groups, or get a review from the string of presentations over the three days. Perhaps in those networking sessions that make for much of these conventions there was some discussion about the latest article related to British Columbia ports that has been published in the Journal of Commerce.

The influential trade publication, has once again has put some focus on disruptions to the transit of goods through British Columbia ports, including the Port of Prince Rupert.

In this article from February 7th, the publication notes that "the delays at Prince Rupert and to a lesser degree Port of Vancouver, raise questions about whether Canadian Marine Terminals and railroads can handle growing volumes efficiently, especially during peak periods, while providing the reliability on which Canadian and US shippers depend."

The article goes on to review some of the past delays at the Fairview Terminal and Vancouver facilities and how the impact of those delays could be viewed by Asian shipping lines, with Canadian Pacific Railway perhaps in a position to benefit from some of CN's troubles of the last six months or so.

And while CP may have something to gain from the current problems with dwell times that affect ports in Vancouver, that rail line does not serve the Port of Prince Rupert and Northern British Columbia.

The  perceptions on reliability that come from the ongoing concerns related to dwell times and railway issues is something that DP World, CN and the Port will want to clear up sooner rather than later.

However, the main advantage that the CN service from Fairview will continue to offer, is that it takes product deep into the United States marketplace, something that CP can't really offer at this point.

That ability to ship goods to and from Asia in a seamless transit far into the American supply chain remains part of the Prince Rupert advantage that has been the main selling point to shipping lines for the last few years.

The JOC notes do provide for an interesting look at how shipping companies and logistics services view the current state of the British Columbia port industry and where they see both challenges and opportunities for it in the future.

For more items related to the Port of Prince Rupert see our archive page here.

To return to the most recent blog posting of the day, click here.
Posted by . at 9:47 AM

Email ThisBlogThis!Share to TwitterShare to FacebookShare to Pinterest
Labels: Port of Prince Rupert and partners at Vancouver Logistics convention