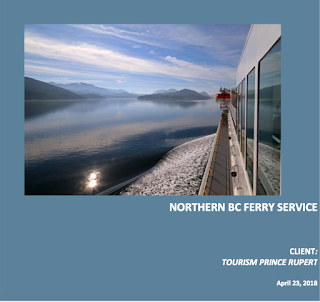 A report  with a goal of bringing the voice of the Tourism sector to the discussion about the future for BC Ferries has offered up a range of concerns and suggestions when it comes to how the provincial government should draft policy towards the coastal ferry service.

As we outlined on the blog back in January, the report had been commissioned by Tourism Prince Rupert, with an estimated cost of 36,000 dollars for the fourteen week review period.

When they provided Wave Point Consultants with the objectives for what they wanted explored, there were four key elements for the consultants to consider.

Identify a mechanism and develop recommendations for the North Coast Ferry advisory committee to have improved dialogue with provincial government and BC Ferries.

For their project Wave Point Consultants reviewed a number of themes related to the three Northern routes of the BC Ferry System:

To deliver their conclusions on the state of Ferry Service in the region and the impact that the current situation is having, they conducted an analysis of the regional economy, tourism sector and the linkages found among all forms of transportation found in the area. Providing a detailed overview as to the importance of the Ferry Service as part of the economic engine of the region.

In order to better understand the focus of the Business and Tourism sectors, as well as customers that make use of BC Ferries services an online survey was used which provided some background on the level of satisfaction that is found when it comes to Northern Service.

When it comes to the level of satisfaction for all three routes that service the region, the common trend that was heard from the customers surveyed was that of moderate dissatisfaction. 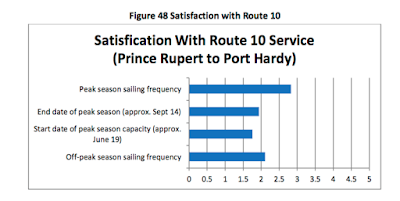 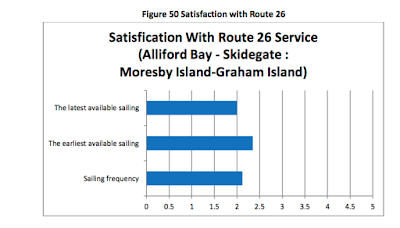 The study which is a total of 103 pages, examined regional transportation linkages, trends and traffic levels, along with a review of the operational analysis of BC Ferries Northern routes.

The study is broken down into nine sections, included among the major themes,

The report is the second extensive look at the impact of the BC Ferry Service on the North Coast, back in 2014 the City of Prince Rupert commissioned a study, Beyond Hope: BC Ferries and Northern British Columbia, that report was designed to provide for the City's answer to planned ferry service cutbacks in the early years of this century.

At that time, then Mayor Jack Mussallem noted that the planned cuts of the day to ferry services would have serious impact on Prince Rupert and Haida Gwaii, as well as communities along the Highway 16 corridor.

The 2018 review, provides for comprehensive notes, graphs and data that outline how the reductions of service of the past have had a significant impact not only on the economic state of the region, but also how reduced service has delivered negative results on the social and community needs for those that rely on BC Ferries for any number of reasons.

By improving on the service and listening to customers and stakeholders in Prince Rupert, Haida Gwaii and Northern Vancouver Island, the authors suggest that BC Ferries could play an important role in sustaining economic development in all three areas of their Northern Service routes.


Recognition that BC Ferries plays a critical role in support of the
Tourism Sector in Northern British Columbia.

Reinstatement of enhanced summer sailing schedules for the North Coast, something which would support the desire of tourism operators to extend the peak season in the region.

A commitment to provide for a five year service guarantee for BC Ferries  Northern Routes,  providing for more certainty for tourism operators when it comes to the scheduled service for BC Ferries

Sustained Dialogue and collaboration with stakeholders in the Tourism sector, offering a chance to address challenges and expand on economic opportunities

The goal for the report authors is to seek better communication between the Province, BC Ferries and the Tourism industry when it comes to the delivery of Ferry services across the region, weighing the importance of the Service to the regional tourism sector as part of the current Coastal Ferry Services Review process.

Scott Farwell, the Chair of Tourism Prince Rupert observed on a pair of themes from the report, the first a look at the relationship between the Ferry Service and the Tourism sector.

“The Tourism sector is vital for sustaining traffic levels and driving growth on BC Ferries North routes. Not only would an enhanced ferry service support an expansion of tourism experiences for travellers to Northern BC but a vibrant Tourism sector in the region could, over the longer term, help BC Ferries meet its passenger targets.”

The Tourism Prince Rupert Chairman also weighed in with observations on how the input from the tourism sector is something that has not always been solicited by provincial and BC Ferry officials.

“For too long the voice of the tourist customer has been missing from government policy decisions regarding BC Ferries service levels. The research report demonstrates the need for immediately extending ferry service in the shoulder seasons. Small business owners have told us how cuts in service have negatively impacted their businesses. Now is the time to introduce the report’s recommendations so that the economies of the local communities – and communities across the province – can grow and thrive.”

The full overview of the report can be reviewed here.


To return to the most recent blog posting of the day, click here.
Posted by . at 9:37 AM

Email ThisBlogThis!Share to TwitterShare to FacebookShare to Pinterest
Labels: Tourism Prince Rupert report on BC Ferries