Park Problems continue to percolate for City of Prince Rupert


Two of the city's most recent playground installations are having their problems these days, with the McKay Street Park remaining closed and the City asking for the help of the public in keeping the Mariner's Park playground from suffering any further damage.

The Advisory on Mariner's Park was issued on Friday, with the City noting that repair work is scheduled for the playground base which has been noticeably damaged in recent weeks..


The City notes that the repair plan will only be put into motion for existing damage as of Friday, so they are asking for those using the park to be cautious to not cause any more damage, otherwise the possibility is that the park could close until repairs are complete.

Residents - many of you may have noticed that the safety surfacing at Mariners Park has been compromised. The City is working with the specialized contractors who did the initial installation to return in the coming weeks to repair and replace it under warranty. The warranty coverage will cover damage done thus far, but will not cover additional damage.

We do not want to have to close the park before they get here, so we are asking that residents, parents and users of the park please leave the surfacing alone and share this message with other users so that we can keep it open for kids and families. Thank you for your cooperation.

Over at the McKay Street Park, the playground structure remains behind a fence, with access off limits until the park is give the official all clear by insurance officials.

As we noted on the blog two weeks ago, the City suggested that the original source of the delay in declaring the park open came as a result of storm damage from the April windstorm that roared through the city

The most recent indication from the City of Prince Rupert advises that the issued is hoped to be addressed by mid-May, when a Municipal Insurance Agency Assessment is scheduled.

The City has outlined that any necessary work to ensure that the playground meets the standard expected will take place as soon as possible, in order to open the park for use by the youth of the neighbourhood.

Though it's not clear if the final bill for that work will be delivered to the City of Prince Rupert, or to Transition Prince Rupert which has been the driving force behind the project since its inception. 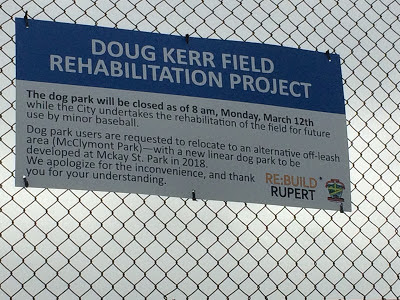 Last week the City also outlined that the opening of the Doug Kerr ball field at the Jim Ciccone Civic Centre has been delayed, while City crews attend to work to try and patch or re-sod some areas that were damaged during the April Wind Storm

Email ThisBlogThis!Share to TwitterShare to FacebookShare to Pinterest
Labels: Park Problems across the City