The offices of Pembina pipelines on Third Avenue West were opened to the public on Monday, as the Alberta based energy company hosted the first of two Open House in the community, a three hour opportunity to explore some of the background to the terminal project and view some of the drawings and documentation related to the project.

Those who dropped in for the Open House, hosted in the new offices for the Calgary energy company which took over the old offices of Pacific NorthWest LNG in the Capitol Mall, had an opportunity to learn more about the progress of the project which has taken on a number of engineering studies to chart out the Watson Island site.

While Pembina continues on with its planning it is also still working through its process of obtaining permits and proposals for the project which will take up a corner of the vast Industrial site that the city has re-named the Watson Island Intermodal Trade and Logistics Park. 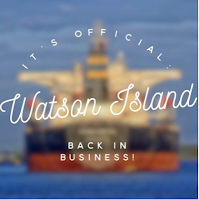 It was also one of the topics of last weeks Hays 2.0 update with Mayor Lee Brain, with the new vision of the old pulp mill site described as a "golden nugget" the City's "ticket out" of its current financial concerns

Though he did not outline if any other tenants are close to signing on to join Pembina at the Watson island site as part of his Wednesday presentation.

If you missed the Pembina Open House opportunity of Monday, you can head out for Port Edward later today, as Pembina takes their presentation on the road, setting up in the Port Edward Community Centre on Pacific Avenue for another three hour session.

The development of the LPG Terminal and the entire Watson Island Logistics Park is something of much interest for Port Edward, particularly as it will mean a significant increase in the number of Liquid Propane trains that will be rolling through their community, and issue that Prince Rupert residents don't have to contend with.

With both Pembina and AltaGas developing their own Terminal projects, the District residents may have some questions of Pembina officials as to how often those trains will be coming through town and how they may assist Port Edward in mitigating some of the issues related to the increase of rail traffic through their community. 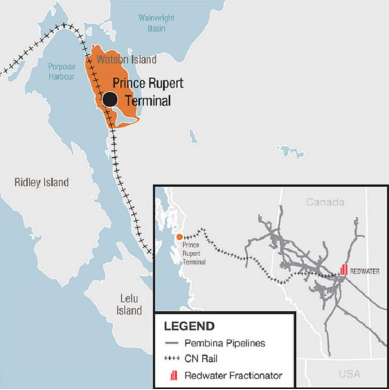 You can also gain updates on the Pembina plans through their website.

As well, should residents of the North Coast have questions related to the project, they can e-mail their inquiries to Pembina at propaneterminal@pembina.com

For some of the latest note related to both the Pembina and AltaGas LPG terminals see our archive page here.

For updates on the Watson Island Intermodal Trade and Logistics Park see our archive here.