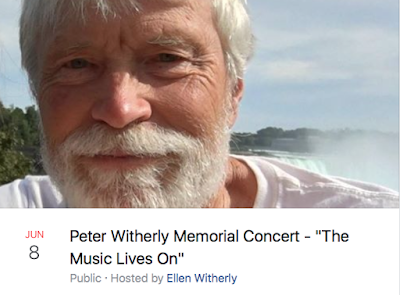 It's more than fitting that the one place where Peter Witherly spent much of his time sharing his gift of music through his years in Prince Rupert, will be venue for the remembrance of his life.

The first notes of the public remembrance were released over the weekend and plans continue to evolve for the Friday, June 8th memorial concert "The Music Lives On",  set for the Lester Centre of the Arts.

The concert, to be hosted by Mr. Witherly's spouse Ellen, will feature a number of those that benefited from Mr. Witherly's musical knowledge and passion for the arts, whether they be students of SD52 music programs, or those who played with him at community events or social occasions, with many having already responded to the curtain call for June 8th.

The concert is open to all guests, with admission by donation, all of the proceeds from the event musical remembrance will be directed towards the Prince Rupert and Region Music Society a group which Mr. Witherly was a driving force behind.

The doors to the night of remembrance and music will open at 6:30, with the event to start at 7PM.

The finale to the night promises to be something extra special, with anyone who was a former student or has played or sang with Peter over the years invited to take part in a mass band and choir number that will bring the evening to an end.

Following the performance, a reception will take place in the Lester Centre Lobby, where many memories of shared experiences will no doubt be swapped among those in attendance.

The popular music instructor and long time advocate for the Arts in the community passed away on February 23rd, a passing that brought many tributes of appreciation for his life and love of community that he shared since his arrival on the North Coast in 1971.

More items of interest related to Community events can be found on our archive page here.
Posted by . at 10:38 AM

Email ThisBlogThis!Share to TwitterShare to FacebookShare to Pinterest
Labels: The Music Lives on a night for Peter Witherly June 8