As tents go up, Prince Rupert finds itself off the housing radar with Victoria 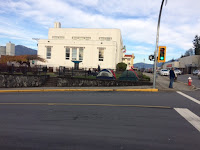 The call for some answers on affordable and emergency housing came to City Hall yesterday, with the arrival of a number of protesters setting up tents on the fountain side of the 3rd Avenue municipal building.

As we noted on Wednesday afternoon, the protest had started with four tents in mid afternoon, with more participants arriving to pitch their tents into the evening hours.

By this morning the count of tents on City Hall lawn had increased to seven. that as word quickly spread through social media of the developing camp out downtown.

In the late afternoon period of Wednesday, Mayor Lee Brain made his first comments related to the tents and outlined through his Facebook page, his plan to introduce the theme of affordable housing once again at Tuesday's Council session, as well as to direct some of the attention on the housing issues towards the Provincial government. 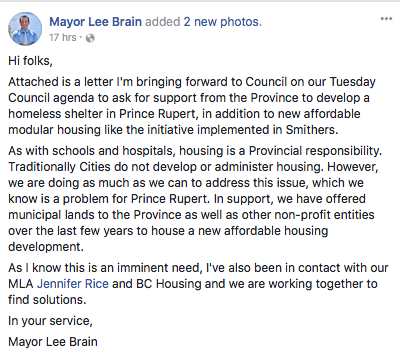 As part of his overview on the days developments through his Social media portal, the Mayor also shared a letter he has written to Selena Robinson the province's Housing minister. 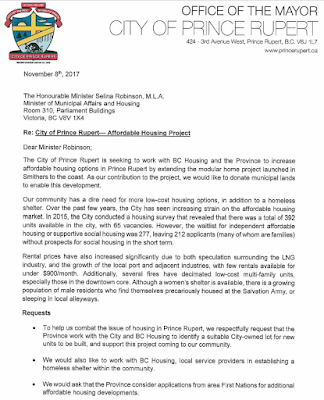 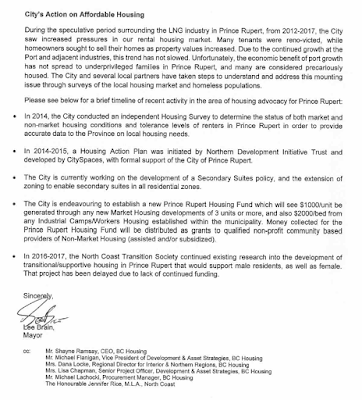 In his commentary, Mayor Brain makes mention of the prospect of extending the Smithers modular home project blue print to land that the City of Prince Rupert would donate towards such an initiative.

We first made note of that Smithers project back in early October, following the announcement of the plan by Premier Horgan at UBCM.

It's a potential housing solution that the City might have wanted to raise with the Premier when they were bending his ear at the annual convention almost two months ago, if not shortly after he took office.

However, even coming to towards some support for that concept this late in the year is at least a step in the right direction for a Council that continues to struggle on the issue of housing.

Some details on what the modular housing concept is all about can be found here.

Mr. Brain also noted that he will be discussing the issue further with North Coast MLA Jennifer Rice, indicating that the MLA and the city have been working on the issue over the years, though he didn't provide much in the way of a list of achievements from all of that engagement.

One topic that Ms. Rice might be able to shed some light on for the city is why Prince Rupert was not included in a recent announcement related to cold weather shelter funding and openings.

Last week, the Province of British Columbia released its list of cold weather shelter locations set to open this month and the winter months begin to draw closer, and while other communities in the Northwest are on the list, Prince Rupert to this point has not been included in the list of options for those in the most need as the rainy weather arrives and temperatures head down the thermometer.

Approaching the issue of affordable housing has been one of the main talking points from City Council since they took office three years ago this week, however for the most part that seems to be all that can be said about the topic, that it has been talked about.

Actual concrete action on the homeless problems in the city remains a most elusive thing.

In his correspondence to the Minister, Mr. Brain notes the number of studies, reports and discussions that have been held on housing in this community, and offers the donation of land for housing as well as the desire of the City of Prince Rupert to work with BC Housing to establish a homeless shelter within the community.

But, in his Facebook review, he offers up little indication as to why there has been little, to any progress in getting some action from the provincial government.

As we've observed on the blog in the past, other Northwest communities have appeared to have had better traction on the theme with both the current NDP government and its Liberal predecessor, with initiatives in  Kitimat, Terrace and Smithers all introducing some form of action either now in motion, or soon to take place.

That's not to say that there hasn't been some progress on housing in Prince Rupert, Council recently hailed two projects directed towards Seniors housing as positive trends, with the repurposing of the old Neptune Inn for Seniors and a proposed Seniors development on land owned by the Metlakatla First Nation.

However, in a somewhat ironic note, the approval of the Neptune repurposing has contributed to a fashion to the growing  deficiency in the housing stock for single men, or couples. Leaving that group to search for limited emergency or affordable housing for which the options are few.

Councillor Thorkelson called attention to that issue in mid October, asking for Council to help in the call for some form of daytime drying centre to at least offer some relief for those in the most need.

She observed that there are few options for those that are homeless have access to, even making a note as to how the basic right to
go to a bathroom for many is not available.

During her discussion with Council, Ms. Thorkelson called for local businesses to perhaps join in the proposal to help develop such a drying facility in the city, offering somewhere for the homeless to be to stay warm, dry and use a bathroom.

Ms. Thorkelson's notes on the ability to find a bathroom should resonate in the community, though if she's looking to send a signal for those in need, the City may wish to review it's own No Public Bathroom policy, which is stated prominently on a sign in front of City Hall which remains in place as of this morning.

The drying centre proposal is one that at least will help address the immediate need on those ugly wet days, and one that the City probably could take some quick action in trying to move forward on, even if they have to dip into their Legacy Fund to provide some form of community engagement towards that initiative.

But even if that simple project comes to fruition, it would be but a band aid to the real issue, the dire situation that has been created by a lack of affordable housing for those in the most need and at the greatest risk.

If other communities such as Terrace, Kitimat and Smithers have found a way to address the issues, then the City needs to quickly review their past work on the file and determine why their efforts seem to fall on deaf ears.

When the city's delegation to UBCM came back following the September convention, Mayor Brain and many of the city's councillors that had attended spoke to a growing confidence that they had found some traction with the new NDP government.

If ever there was a time to see if those percolating relationships have any substance, it surely is with the issue of providing for affordable housing.

Hopefully, North Coast MLA Jennifer Rice, who offered up her first comments on the protest last night, can help City Council in getting across the message of need in this community.

In the end, it shouldn't require residents having to pitch a tent to solve a social issue, particularly one that all the members of this Council have been immersed in from even before we counted the votes back in 2014.

You can review our lengthy list of items on Housing from our archive page here.

More background on many City Council discussion topics can be found on our Council Discussion archive page.


We also have created an Archive to track some of the developments as the situation at City Hall evolves here.
Posted by . at 10:05 AM

Email ThisBlogThis!Share to TwitterShare to FacebookShare to Pinterest
Labels: Raising awareness on homeless in Prince Rupert