Any thoughts of rezoning a property on Van Arsdol Street in the city's far west end, were pretty quickly dashed on Monday evening as a large delegation of residents of the Van Arsdol/Graham Avenue area appeared at Prince Rupert City Council.

The group led by Ms. Judy Warren, took advantage of the Committee of the Whole process on Monday evening to make it quite clear to the Council members that the idea of parceling off the property where a residence known locally as "The Castle" was something that they would not accept in their neighbourhood.

Ms. Warren recounted for Council some her past efforts on city committees to develop planning standards in the community. She called attention to the City's Official Community Plan and speaking for the residents she asked council why they would have such a document if there is going to be variations to the guidelines that have been in place for a number of years.

"We are all tired of every few months having to write letters and come to council to say no to speculators, who wish not to abide by the OCC bylaws and zoning. The Castle is the second most significant heritage home in the City of Prince Rupert and deserves protection. The subdivision of this lot does not meet any bylaws or zoning rules, so say no and give the planning department authorization to reject this kind of proposal, without neighbourhoods having to fight to have the rules upheld"

A second speaker as part of the echoed the key themes from Ms. Warren's statements, reasserting the passion that residents have for their neighbourhood, stressing how that the residents of the Graham/Van Arsdol area do not wish to see their neighbourhood changed in the way they believe that the proposed variance would.

The group also had presented a range of documentation related to their opposition to the variance request, with the Mayor noting that the City had received about eighteen letters on the topic of the proposal.

During the regular council session, City Planner Zeno Krekic reviewed the background to the proposed variance and made note of the feedback the city had received from the residents of the area.

"Public notification was hand delivered on October 17th and as of the date of this report staff had received two inquiries seeking additional information. Since then, most of it today, we received eighteen comments, which were all copied and distributed to council prior to this meeting. Arguably most of the comments are in relation to other matters than the purpose of this variance permit, after reviewing the comments, Council can proceed to final consideration" 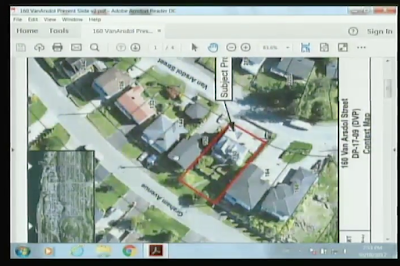 When the Council members addressed the issue, there was little for them to add to the concerns expressed by the residents of the area, with the Councillors clearly having heard their opinions and the level of their resolve.

Councillor Niesh led off the discussion by noting his opposition to the proposed variance, observing that the City should not be setting a precedent of creating non conforming properties, all over town, he also offered a personal opinion stating that he couldn't believe anyone would want to think about destroying such a beautiful house.

Councillor Cunningham made note of his opposition to the variance and how at a previous Council session the members had indicated that the public should have a say in the request and that it was clear that the residents of the area had done just that earlier in the evening.

"Last council meeting when we put this out to public, we made a comment then to let the people in the area decide and I think they have decided for us with a resounding no"

He also observed that at the moment the house on the property is being operated as either a Bed and Breakfast or a Boarding house and they don't have a business licence for that purpose. He noted that  he is not opposed to such a use of the property, however if the house is not following the bylaws that are in place already he has a problem with that and has asked the department to investigate it further.

Councillor Thorkelson asked for some clarification on how the process of subdivision works, as well as some background from the City Planner on how the OCP addresses the issues of the neighbourhood.

Councillors Randhawa and Mirau also registered their opposition to the variance request, while Mayor Brain also spoke to the issue prior to the vote.

"Just to be clear to folks that are here as well, Council has a legal obligation to accept any proposal that comes forward, but what we do through the Council process is collect the information that we need to make good decisions for this community. And part of that is sending things like this to public notification. ...  It's not Council necessarily bringing things forward, as it is developers who bring things forward to us and then we have to follow a process ... personally I'm also not in favour of this either, I believe this a poor idea, and a poor proposal and I echo Mr. Niesh's sentiments about why you would want to ruin such a beautiful property and add such unnecessary density"

At the end of their discussion, Council delivered a unanimous vote against the variance request, a decision which was greeted by some sustained applause from the contingent in Chambers for the vote.

You can review our larger notes on both the presentation from the delegation and the Council deliberations on it from our Council Timeline feature.

As well, the presentation from the Graham Avenue residents and the Council discussion on the variance request is available for viewing as part of the City Council session video archive.

The Graham Street presentation starts at the 19 minute mark, Council's review of the request comes at the 54 minute mark of the evening.

A look  variance request can be found as part of the Agenda package for the Regular Council session from Monday starting on page 20.