The current placement of two Totem Poles beside Prince Rupert City Hall has made for a potential flash point when it comes to themes of Reconciliation on the North Coast, with a local group from the North Coast Multicultural and Immigrant Society making the totems one of the focal points of a presentation to  Council on Monday night.

Louisa Sanchez, Peggy Davenport and Colleen Hermanson spoke on behalf of the North Coast Community Response Network bringing attention to their work and the findings related to the Truth and Reconciliation Commission that have the most relevance for the local community.

The group provided a short overview of the harm that had been created by the Residential School experience, among some of those impacts the group noted the areas of child welfare, education and health care and aboriginal justice as part of their presentation.

As part of their review the group touched on the growth of the Port of Prince Rupert and some of the social issues that have been created in the community as the expansion process has moved forward.

The two totems at City Hall came up as part of their three recommendations for Council's consideration, with the long established poles flagged as not representative of the local community owing to the prominence of references to the Haida, while the local Tsimshian First Nation is absent from them.

"Nowhere are we informed that the City of Prince Rupert sits on traditional Tsimpshian territory. This is not part of the Haida Nation. This level of ignorance shows a lack of respect as well as inaccuracy. In Prince Rupert, the Tsimshian culture is alive and well. This is the reality that should be displayed in front of our city hall. An example of a current Tsimshian pole is the one recently carved by Bill Helin, in honour of his father Art and stands alongside the Crest Hotel ... The Prince Rupert community of artists is strong and capable. We encourage them to help us out here." -- From a report on Truth and Reconciliation findings delivered to Prince Rupert City Council on Monday evening. 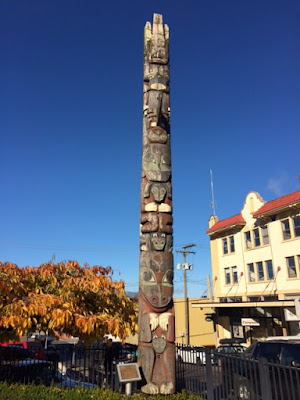 The full list of the three recommendations from the group included themes related to the following:

Services such as options for sexual and reproductive health, noting some of the social concerns related to port development and the impact on residents in Prince Rupert.

Ensuring that residents of Acropolis Manor are included in community events and bringing the community to the manor are important.

The third issue raised, was to draw attention to the two totem poles currently in place at City Hall facing Third Avenue West.  The group called for the current poles which are Haida in nature, be corrected from their current status and updated to better reflect the First Nations of the local Tsimshian community.

The delegation also offered up some background on the Truth and Reconciliation process and noted that Canada is one of 41 nations in the world that have embarked on that process, noting how their findings reflect some of the impact found in the community from past procedures and policies.

One initiative that is currently in motion around town is the quest to make the June 21st National Aboriginal Day, a national statutory holiday, with a petition currently circulating to build support for the creation of the next stat holiday.

Kaarlene Lindsay at Northwest Community College is collecting letters of support locally and will be forwarding them to become part of the official record, while you can also sign an online petition on the website of MP Georgina Jolibois.

You can review the delegations full presentation to Council as part of the City's Video archive starting at the four minute mark of the evening.


The Report compiled by the Community Response Network and presented to Council is available as part of the Agenda for the Committee of the Whole for October 30th it starts on Page two of that agenda package.

During the course of the presentation on Monday, Council members thanked the group for their report and pointed to their appearance at the session as a valuable element of the City Council Committee of the Whole process.

More notes related to Monday's Council session can be found on our Council Timeline Feature.

A wider overview of discussion topics at Prince Rupert City Council can be found on our Discussion page here.

Email ThisBlogThis!Share to TwitterShare to FacebookShare to Pinterest
Labels: Truth and Reconciliation recommendations for City Council