A plan from last week's City Council session to move forward with a new Communication Policy for the City of Prince Rupert has hit a snag, as Councillor Barry Cunningham asked for a bit of extra time to review the wide ranging document prepared by Communications Manager Veronika Stewart.

The request to table the conversation on the new policy came following a short presentation from Ms. Stewart who had provided a snap shot of the some of the changes to the existinh policy in effect from 2003, the main focus being that of social media and how the city staff and council members might engage the public through those available forums.

The original request for a review of the policy came as part of Councillor Mirau's commentary related to in camera council sessions and how the City might better communicate their discussions from those sessions.

Ms. Stewart had noted that the main focus for the Closed Sessions comes from the topics of Land, Labour and Legal themes, she noted that the City should strive to strike the right balance between confidential issues and the release of information. 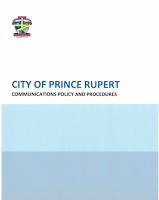 Her work on the confidentiality recommendations, offered the chance to expand the overall City communication policy to better reflect the more modern technology available and staff resources.

On the theme of the city's social media streams she observed as to some the social media accounts that she currently is providing administrator duties for:

As well the city has the following internet profiles

The Recreation Department administers their own Facebook page out of the Civic Centre.

At this time only Mayor Brain and Councillor Mirau are engaged on social media when it comes to civic issues or notices.

The opportunity to discuss the observations on public disclosures from Closed Council discussions, as well as the new regulations governing social media however was brought to an end after Councillor Cunningham made his request to table the motion, asking for more time to review the proposal further.

Councillor Thorkelson also offered up a few comments on that theme, asking how Council members could seek out more background from Ms. Stewart prior to the topic coming up at the next council session on November 14th.

Those councillors that wish to seek out more details on the different elements of the new policy were instructed to send the Communications manager an email to get their answers, before Council considers the topic again at mid month.

A larger overview of the discussion of Monday is available on our Council Timeline feature.

The Video archive of the discussions prior to tabling can also be viewed starting at the one hour, eighteen minute mark.

You can review the proposed policy from the City's Agenda page from the October 30th session, it starts a page 54 of the package.

Council will review the policy again at the November 14th meeting where it once again will be asked to repeal the  2003 policy and approve the new policy.