The AMHS Ferry Terminal at Fairview Bay is going to get a little love from the Ketchikan Gateway  Borough Assembly tonight, as elected officials in our neighbouring city discuss the topic of renovations for the Prince Rupert departure and arrival point, looking to move forward the currently stalled reconstruction project.

Assembly Member Stephen Bradford has sponsored the resolution to be discussed at tonight's Borough Assembly session, which will trace some of the connections between Prince Rupert and Kethchikan.

The resolution will highlight the economic, social and cultural ties between Prince Rupert and the Alaskan Southeast, as well as to recount some of the exchanges between the two regions that have taken place in recent years.

The Ketchikan Assembly will hear more on the how the port facility in Prince Rupert is in serious repair, with the document noting that situation is so dire at this point that service to Prince Rupert in the future could be in jeopardy.

The initiative sponsored by Member Bradford, who is a member of the Board of Directors of the Southeast Conference can be reviewed below: 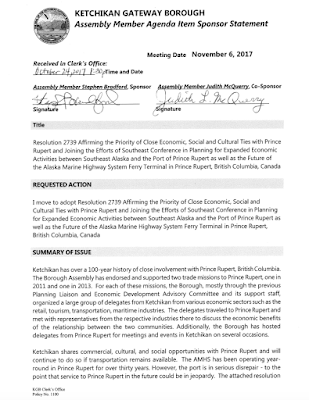 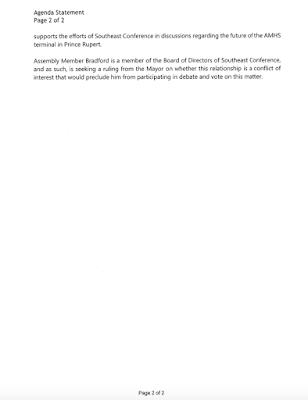 Progress on remediation and renovation of the Fairview Terminal has been stalled since January of 2015 when the Alaskan Government's call for bids was called off and the proposed project was put on the shelf as part of a dispute over sourcing of materials under the Buy American policies for the terminal upgrade.

More background on the nature of that dispute can be found from Transportation archive of 2014.

As we noted back in April, the AMHS Terminal replacement project had not been listed as part of the Alaska Transportation plan for 2017.

At times the prospect of losing the service completely has been raised north of the border, as the state seeks to resolve its transportation and funding issues.

The topic has been one of Mayor Lee Brain's talking points since taking office, with the Mayor having taken the cause to Alaska on a number of occasions, though he has not had much to say on the status of the topic in recent months.

The Mayor's last notes related to the AMHS facility came in May when he and a delegation from Prince Rupert were in Ketchikan to speak to the Chamber of Commerce there.

At the time he noted that Prince Rupert and Alaska officials had been engaged with federal officials to try and find a compromise on the current impasse related to the terminal construction.

Earlier this year we observed that the issue seems to have fallen off the radar for federal officials, with few comments from Skeena-Bulkley Valley MP Nathan Cullen on the theme of finding some progress on the project.

You can find more background on developments from our northern neighbour from our archive page here.

Items of interest on the Alaska Marine Highway service to the North Coast can be found as part of our Transportation archive.
Posted by . at 9:31 AM