Those looking for quick action on housing issues in Prince Rupert might be a little disappointed in the first comments from North Coast MLA Jennifer Rice, who Thursday evening relayed some of her early thoughts related to the tent protest currently taking place at Prince Rupert City Hall.

While the MLA shares her comments of compassion for those in need, the bulk of her commentary from Wednesday evening is steeped in pointing to past Liberal policies and attitudes, as opposed to what immediate help she and her government might be able to deliver in the short term for Prince Rupert.

Her commentary delivered through her Facebook page provides a check list of recent NDP announcements and a heavy dose of partisan finger pointing towards the BC Liberals, none of which, as more than a few respondents that followed up with their own comments noted, has much to do with the current dire situation in the city.

At one point of her commentary she goes even further off the immediate issue, offering up some criticism of the current BC Leadership campaign, something that is well within her purview, and a potential topic for future discussion, but surely not on the same day that tents are accumulating at City Hall.

Viewed as to part of a response to the growing concerns over housing in Prince Rupert,  the timing of her critique seems quite out of step with what should be her true focus, finding and acting on a solution for the issue at hand back in her home riding.

The only tangible notes that the North Coast MLA shares in relation to the local protest currently taking place at Prince Rupert City Hall, is an acknowledgment that she has talked with Mayor Brain and has also spoken to Selina Robinson the Minister of Municipal Affairs and Housing. With Ms. Rice noting that she has discussed moving forward with short term and long term solutions for stable housing in the Prince Rupert.

However even with that review, her comments for the most part are rather vague, Ms. Rice doesn't mention what those options may be, nor does she provide for some kind of timeline that she believes could be put in place to address the concerns, something that as she correctly observes has been in existence in the riding for over sixteen years.

While having some pride in the accomplishments of one's boss and the government team in the first 100 days of office seems to be a talking point for many of those now on the government side of the Legislature, pretty well all of those housing initiatives that have been mentioned by the North Coast MLA are taking place in other communities.

Places where for some reason the message of need in other communities is getting more attention from the party currently in power.

Perhaps when she next weighs in with an update she will be able to share of some concrete action for the residents of the North Coast, providing for a more constructive approach to message making on this issue.

When one reviews the current approach offered up last night, it only serves to highlight that Prince Rupert seems to be having a problem getting anyone to hear its plight and to take any action. 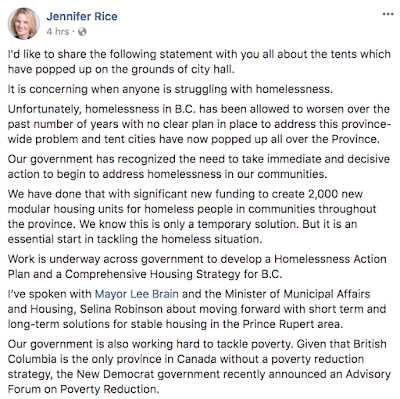 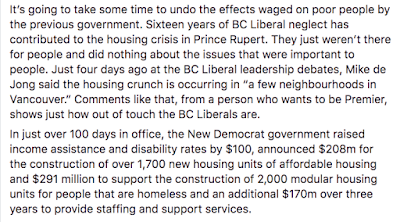 More items of note on the housing issues of the Northwest can be found on our Archive page.

A look at Ms. Rice's work at the Legislature can be reviewed from our Legislature page.
Posted by . at 8:54 AM