It's but one line of a third quarter report for investors, but for those looking for some indication of the progress for a proposed propane shipment plant for Watson Island, the Pembina Pipeline Corporation report is keeping those hopes in motion.

The report which was delivered last week, recounts a range of items from current financial forecasts to a look towards new developments and Growth projects, which is where Prince Rupert gets its moment of note from Pembina officials. 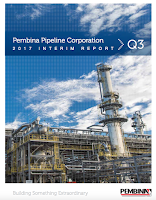 Pembina previously signed a non-binding letter of intent identifying Watson Island, Prince Rupert, as a potential site for a propane export terminal and continues to progress consultation with key stakeholders.

No timeline was included in the third quarter report as to when Pembina might have a further announcement, or make a Final Investment Decision when it comes to the Prince Rupert proposal.

Mick Dilger, Pembina's President and Chief Executive Officer highlighted the current financial results and how they are assisting the company as it looks towards a number of future projects, which would seem to include continue assessment of the proposed shipment terminal for Prince Rupert.

"Looking ahead, we will stay focused on successfully completing the remaining growth portfolio, further progressing our large-scale potential project roster as well as working to integrate Veresen and to achieve the near-term expected synergies of $75 to $100 million on a run-rate basis. We are now positioned as a leading North American infrastructure company able to continue delivering top-tier performance and I am excited to realize our expected transformational results,"

The full 54 page documentation for the Third Quarter report is available here.

The short review of the proposed Watson Terminal plans can be found from the Pembina website here.

The Pembina proposal is one of two, Liquid Propane Shipment terminals currently slated for the North Coast. The AltaGas Ridley Island Terminal project is already under construction and well on its way towards its completion in 2018, with service to Asian markets expected to start following its commissioning.

Our notes related to the latest items of interest related to both projects can be reviewed from our archive page.
Posted by . at 8:47 AM