Terrace businesswoman Lucy Sager has brought an end to her campaign to replace Christy Clark as leader of the British Columbia Liberal party, throwing her support towards former Surrey Mayor Dianne Watts.

In a statement posted to her Facebook page today, Ms. Sager thanked her family, campaign team and volunteers that had stepped up to help with her campaign, making note of a number of personal setbacks, she announced that she was stepping out of the race to focus on her family.

She indicates in her resignation announcement that she will continue to work with the BC Liberals as they look to select their new leader in 2018. 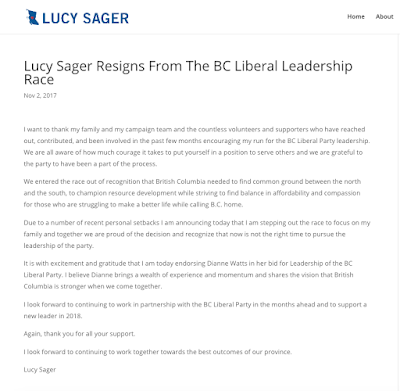 As for her support as the Liberals head towards selecting a new leader, she has indicated that she will be supporting Dianne Watts, providing her endorsement today and speaking to the wealth of experience that the former Surrey Mayor brings to the leadership campaign.

Ms. Sager had previously served as a member of Skeena Liberal candidate Ellis Ross's campaign team and was part of the successful push to send him to Victoria as the new MLA during the May election campaign,.

That background from the campaign could help deliver some of the Northwest vote to Ms. Watt as the leadership vote gets closer.

For her part, Ms. Watts hailed her opponents work with the party and welcomed her to her team through social media on Thursday afternoon. 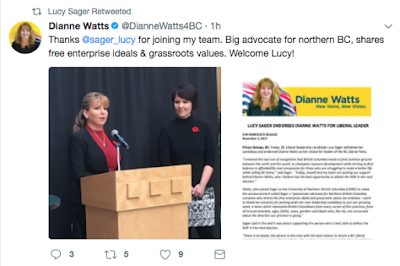 Her departure from the leadership quest leaves seven candidates still in the running for the BC Liberals, you can review the latest of campaign notes from our Leadership tracker page from our political portal D'Arcy McGee.
Posted by . at 3:54 PM

Email ThisBlogThis!Share to TwitterShare to FacebookShare to Pinterest
Labels: Lucy Sager steps out of BC Liberal race