The primping and practicing will have one more week to make a difference as contestants in this years Mz Judged 2017 competition prepare to take to the stage of the Lester Centre to claim the title for the fifth annual fundraising event for the North Coast Transition Society.

The popular event puts a celebrity list of men into high heels and fashion gowns, working on their dance routines and entertainment selections as part of the lead up to the Friday, November 10th event, which hits the stage at 7PM.

Updates on the preparations and rehearsals for the annual beauty pageant have been uploaded to the Mz Judged Facebook page, which also features a few looks back to previous events

Tickets are available at Cooks Jewellers or the Lester Centre Box Office for 30 dollars each.

Fifteen participants have signed on for the 2017 competition, in addition to taking in the show next week you can also make a contribution to the pledge form of your contestant of choice.

Contact the North Coast Transition Society for more details on how you can pledge before the November 10th event.


One of Les Mz Judged contestants is Prince Rupert Mayor Lee Brain, who has been busy through his Facebook portal soliciting donations with an offer that some may be able to refuse, or pay to refuse, while others perhaps will be most intrigued by the Mayor's promise, with donations increasing through the week towards a big reveal! 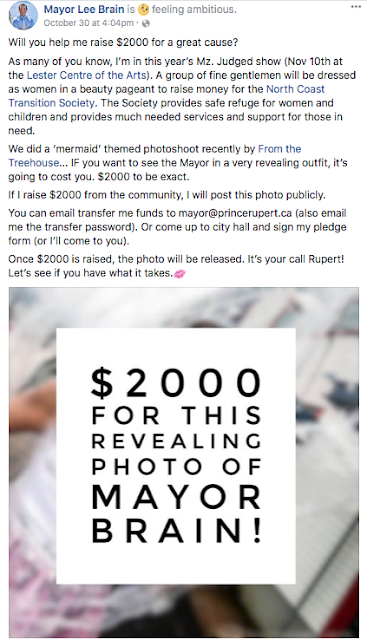 The Prince Rupert night has been a very successful version of what has become a growing number of similar events held across British Columbia, as well, snippets from past Prince Rupert shows have become part of the early rushes of what is hoped to be a documentary on the project.

More on the province wide efforts can be found here, the trailer for the documentary can be reviewed below.

The main theme of the Mz Judged competition is to help raise awareness about, and to end the cycle of violence agains women.

Over the last five years the Prince Rupert event has helped connect the community with the issues and engaged men in a dialogue about ending violence against women.

More background on the North Coast Transition Society and their work in Prince Rupert and the surrounding area can be found on their website and Facebook page.

For more items related to community events on the North Coast see our archive page here.
Posted by . at 2:40 PM