Skeena-Bulkley Valley MP Nathan Cullen has defended his title as the Best Orator on the Hill, with the Northwest MP receiving the accolades for the second year in a row when it comes to his gift of the craft of Parliamentary oratory.

In an article that notes Cullen is the Explainer-in-chief, Maclean's makes note of his abilities and how he has evolved to the status of the Hill's most articulate advocate of the political message.

Those that have seen (and heard) the MP in action across the riding won't be surprised that his ability to connect listeners to his message has once again been singled out for notice.

First elected to office in 2004, Mr. Cullen has had more than ample opportunity to polish his speaking style and hone his political points through numerous political events across the riding and beyond.

The Skeena-Bulkley Valley MP made note of the night in Ottawa through his twitter feed. 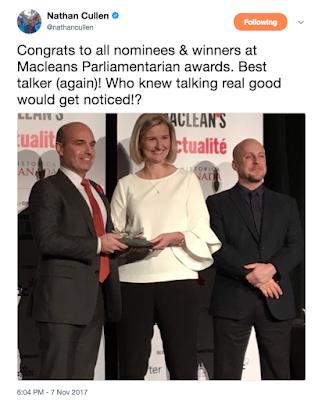 The snapshot of his profile as part of the Parliamentarians of the year can be reviewed here.

You can review the full article, which includes interviews with some of the award recipients here.

For a look at some of the work of Mr. Cullen on behalf of the constituents of Skeena-Bulkley Valley see our House of Commons archive page here.

More notes related to federal politics can be found as part of political blog, D'Arcy McGee, named after one of Canada's notable political orators of the past.