A member of the City Council in Terrace will bring her extensive background in the advocacy of poverty issues to a provincial committee, as the new NDP government embarks on the early stages of its plans to develop a Poverty Reduction Strategy.

Stacey Tyers was appointed to the Forum, with Ms. Tyers work as a senior poverty law advocate and past life experiences noted as part of her introduction as a member of the twenty seven person panel initiated by Shane Simpson the Minister of Social Development and Poverty Reduction.

Ms. Tyers participation in the project makes for the only Northwest based membership on the advisory forum collective.

Her resume of work and background on issues of poverty highlight some of the elements that she will bring to the provincial forum.

Stacey Tyers is a senior poverty law advocate from Terrace., located in beautiful Northwest B.C. Stacey is a two-term Terrace City Councillor, and the former chair of the Regional District Kitimat-Stikine.

Stacey has an extensive background in poverty law, poverty reduction, poverty education and awareness. She has held a variety of roles in the field from Executive Director of Terrace Anti-Poverty, Poverty Law Advocate and Manager of Counselling and Support Services. Stacey has worked passionately on the front lines of poverty, systemic advocacy, and in decision and policy implementation positions such as city council. In addition to her professional experience, Stacey has lived in and experienced poverty as a single mom. Her passion and work in the field comes directly from wanting to provide the respect, support and assistance to the people she serves.

Some of the Boards and Committees Stacey has been involved with include the BC Access to Justice Committee, Community Legal Assistance Society, Povnet, Ministry of Social Development – Moving Forward Steering Committee, Ministry of Social Development – Regional Quality Service Control, APSECT BC and Federation of Canadian Municipalities – Social and Economic Committee. Stacey is a single mom to her daughter, Keysha.

Leslie Varley a member of the Nisga'a Nation is also part of the Forum, she currently is based out of Vancouver and serves as the Executive Director of British Columbia Association of Aboriginal Friendship Centres.

In his introduction of the program, Minister Simpson noted that the time had come for a new approach to how the province approaches and works to end the cycle of poverty in British Columbia

“Poverty affects too many people in our province. It’s time to change that and today is where we start to forge a new path,”  ... “This group of advisors will support me as we work together to bring effective and permanent solutions that will lift people out of poverty and help them to build a better life.”

As for it's work, the Advisory Forum has six key elements associated to their work, among the focus that the panel will bring to their work is:


Identifying causes of poverty and innovative approaches to poverty reduction;

Recommending priority actions and principles for the Poverty Reduction Strategy that governments and all sectors of society can collectively work on and support;

Discussing ideas for poverty reduction generated through the consultation and engagement process;

Offering expertise and advice on how best to implement the Poverty Reduction Strategy in the context of other government priorities;

Working within communities to encourage full participation in the Poverty Reduction Strategy;

Providing advice on legislation, including targets and time lines.


The Poverty Reduction Strategy initiative is also seeking the input of the residents of the province, with plans for in-person engagement sessions to be launched for up to 20 communities, with the dates and locations of those sessions to be announced through the month of November.

As well British Columbians can take part in the process of review through a web page created by the Ministry which you can review here.

The public participation portion of the review will continue through until March 30th, 2018

Some notes on the Poverty Reduction Strategy plans from yesterday's announcement can be found here.

The background for all of the panel members is available here.

North Coast MLA Jennifer Rice took note of the introduction of the Forum with a Facebook post on Tuesday.

In her update for constituents, she takes a few partisan shots at the previous Liberal Government, before outlining the path ahead for the NDP Government's plans and encourages residents of the North Coast and Haida Gwaii to participate in the process. 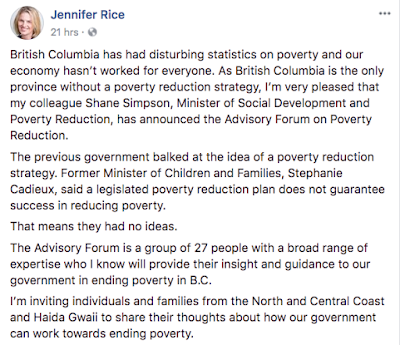 For more background on developments from provincial politics see our Legislature Archive page, while a wider overview of the notes out of Victoria is available from our D'Arcy McGee portal.
Posted by . at 9:25 AM