We pause in Remembrance this Saturday, as Prince Rupert residents gather at the Court House

As well, those pausing to remember at 11 AM, will be providing a salute those that have served the nation both in the wars of the past and for those who today uphold our military commitments and perform our law enforcement services across the nation.

Ceremonies of Remembrance will be held both in the national capital and in cities and towns, large and small across the nation tomorrow.

The Ottawa ceremony, will be nationally broadcast on all of the major network and news channels starting at 7 AM British Columbia time. 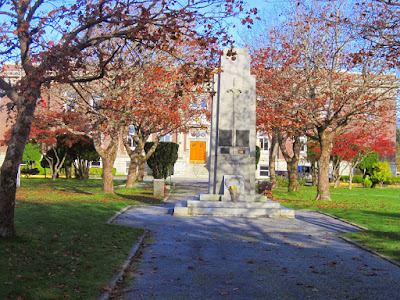 In Prince Rupert, the local Remembrance Day ceremony will take place at the Court House cenotaph, with the march past to the Court House starting at 10:45, the wreath laying ceremony should start at 11 AM.

For local participants in the annual remembrance Day events, Saturday will hold a bit of extra significance, marked as it is by the first Remembrance Day ceremony not led by Mike Lamb, who had been one of the key organizers for many of the past Prince Rupert events and a long time fixture at the front of the parade to the cenotaph each year.

Mr. Lamb passed away last month as the final touches for this years ceremony were being put together, leaving a lasting legacy in the community for his involvement and commitment towards the annual gathering of remembrance.

On Thursday, students of Charles Hays Secondary School gathered to commemorate those who have served their nation in the past, with CHSS Principal Sandra Pond making  note the school assembly of yesterday. 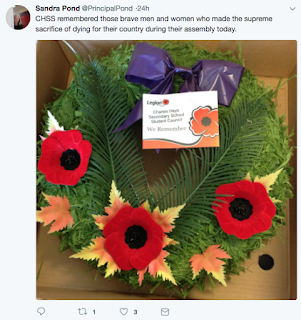 Other schools in Prince Rupert both in the public system and the Independent School Annunciation also observed the nature of Remembrance Day for their students.

Those looking to spend some time this weekend to reflect and review the sacrifice that Remembrance Day provides for can make use of a number of online resources for their journey.

Veterans Affairs Canada has been profiling some of the historical moments of the nations military heritage, making available a number of links for Canadians to explore.

One important historical feature to take time to review is the online version of the Books of Remembrance, the moving listings of Canada's War Dead that can be found in the Peace Tower of the Centre Block of Parliament Hill in Ottawa.

The Virtual War Memorial an online reference provides the opportunity for Canadians to search the books or to seek out information through a search engine.

You can explore that resource page here.

The National Film Board is also providing a number of their films and documentaries on Canada's past war efforts, peace keeping missions and other areas of interest related to Canada's military.

The front page of the NFB site offers the links to a variety of options that can add to your awareness of Remembrance Day and why we pause to reflect.

Social media is also marking the Remembrance Day observations, with #CanadaRemembers a good place to start your search on relevant items of remembrance for the weekend.

2017 marks another milestone to be remembered at this time of Remembrance, marking the 100th anniversary of the Battle of Passchendaele of 1917.

That pivotal military battle for Canada's First World war contingent has been observed through a number of ways, the Veteran's Affairs website makes for a good starting point.

The twitter feed #Passchendaele100 also provides for links and more background on the First World War engagement by Canadian troops.

YouTube also offers up a range of background material to learn more about the battle,

And for those that haven't seen it yet, the 2008 feature film Passchendaele from Canadian film maker Paul Gross, available through iTunes, puts the battle into focus through characters both home and on the field of battle.

If you're in the downtown area tomorrow, stop by the Cenotaph either during the commemoration ceremony or later in the day to provide for your own tribute.

On Remembrance Day the Prince Rupert Court House Lawn makes for a very special place for reflection on the sacrifice of those of the past, so we can enjoy our freedoms of today.

In Flanders fields the poppies blow
Between the crosses, row on row,
That mark our place; and in the sky
The larks, still bravely singing, fly
Scarce heard amid the guns below.

We are the Dead. Short days ago
We lived, felt dawn, saw sunset glow,
Loved, and were loved, and now we lie
In Flanders Fields.

Take up our quarrel with the foe:
To you from failing hands we throw
The torch; be yours to hold it high.
If ye break faith with us who die
We shall not sleep, though poppies grow
In Flanders Fields.