With a promise of stable funding for the next few years, the Province of British Columbia is helping out with the fight against invasive plants in the Northwest, allocating close to 600,000 dollars over two years to the Northwest Invasive Plant council.

Doug Donaldson, the Minister of Forests, Lands, Natural Resource Operations and Rural Development made the announcement on Wednesday, highlighting how the creation of stable funding will assist in the management program.

“Our government is committed to containing or eradicating harmful invasive plants that adversely affect both rural and urban communities,”  ... “The introduction of multi-year grants will help recipients develop effective, long-term plans to manage invasive plants at the regional level.”

The Northwest Invasive Plant Council, a Prince George based organization will have to make that money stretch a bit across its eight Invasive Plant Management Areas across Northern BC

A swath of land that it watches over from the Alberta border to Haida Gwaii. 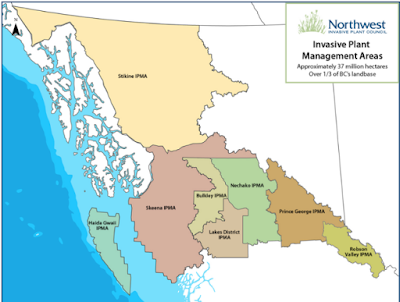 The organization's website provides an extensive listing of the range of invasive plants that British Columbians need to be on watch for, included on that list is knotweed, a scourge in Prince Rupert that the City of Prince Rupert put on its list of concerns a few years back.

The Northwest Invasive Plant Council's 596,000 dollars in funding is part of a larger pool of money totalling 7.7 million dollars that the province has directed to other organizations, regional governments and municipalities as part of their commitment towards the program.

You can learn more about the work of the Northwest Invasive Plant Council here.

To report any sighting of invasive species anywhere in BC, you are asked to call 1-888-WEEDSBC or by using the online reporting form found here.

More on yesterday's funding announcement can be reviewed here.

Further items of interest related to the work of the BC Legislature can be found on our archive page here.

A wider overview of the province's political scene can also be found on our political blog D'ArcyMcGee.