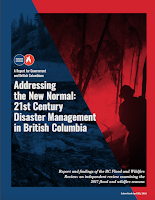 George Abbot and Chief Maureen Chapman have delivered their comprehensive review of last years Flood and fire season and the provincial response to the twin emergency situations that impacted on many areas of the province in 2017, indicating that last years twin dramatic  events could be considered the new normal for the province and its residents.

Mr. Abbot a former Liberal cabinet Minister and Chief Chapman, a hereditary Chief of the Skawahlook First Nation were appointed by Premier Horgan in December of last year to examine all aspects of the Province's response to the floods and wildfires of 2017.

The timing of the report's release for the end of April was designed to provide officials with recommendations and information for use in the 2018 flood (known as freshet) and wildfire seasons.

The 148 page document was released April 30th, but delivered publicly yesterday,  and reviews a range of areas of concern, with the findings of the co-authors providing a glimpse into the challenges that were faced by residents, fire crews and first responders and community officials with a need for better communication and improvement in preparation among the two areas where work will be needed to provide for better response in the future.


The introduction to the report, addressed to Premier Horgan lays out the tone of the review, calling attention to the ongoing issues related to Climate Change and the impact it will have on the province, as well as a call for better coordination on a nation to nation basis with First Nations communities across the province.

Beyond exploring the overall context for the devastating events, this report includes highlights from a robust series of public engagement sessions that took place in winter 2018, as well as a series of recommendations. Many of the recommendations we are making align with those made by individuals, organizations and the many First Nations communities that were directly impacted. Their valued contributions, perspective and willingness to share were central to our recommendations. At all stages of our work, we experienced a true willingness on the part of all British Columbians to collaborate in improving emergency management in our province.

The challenges faced in 2017 may not have been an anomaly, but a strong indication of a new normal our province and planet now face due to the unpredictable and increasingly volatile impacts of climate change. Moreover, the strength of the United Nations Declaration on the Rights of Indigenous Peoples and the commitments outlined in your Ministerial mandate elevates the voices and positions of Indigenous Peoples. This report presents many opportunities for your Government to engage in true Nation-to-Nation relationships with the First Peoples of the province.

The work from Mr. Abbot and Chief Chapman included a reference to review the recommendations from the Filmon Report of 2003, which examined and offered recommendations related to the dramatic wildfires of Kelowna and Barriere McLure Lake of that year, with this 2018 report finding that unfortunately there had been little progress  on the goals of enhancing community safety from those 2003 fire events.

The review of last years 10 week state of Emergency, noted that over 65,000 residents had been displaced from the homes as the provinces forests burned, observing as well that the response to the Spring flood season of 2017 had exceeded 73 million dollars.

Much of the work involved reviewing 929 survey responses, as well as receiving feedback from 313 attendees to Open Houses held as part of the Report gathering stage. The working group also received 127 written submissions and had 73 one on one meetings to determine the impact that floods and fires have had on British Columbians.

The project brought them to 20 communities in affected areas and as they wrapped up their work they had determined that they had reached over 60,000 people through Facebook. 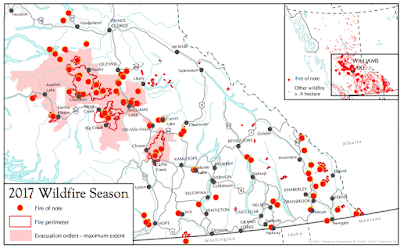 The Report goes into great detail to explore the anatomy of floods and the causes of wildfires, tracking some of the key milestones that led to the devastation through wide swaths of the Cariboo and portions of the Thomson and upper Okanagan regions last year.

One interesting portion of the review, dedicates a fair bit of attention at the work of the Wildfire Service in battling the vast number of fire incidents that developed in the Williams Lake region, where tough decisions had to be made in a short period of time, all while emergency officials were organizing evacuations to larger Centres such as Kamloops and Prince George.

The Conclusion to the Report includes some 108 Recommendations, weighing in on themes such as:

The need for improved education was highlighted among the recommendations

Strengthen public understanding of the risks and personal responsibilities associated with living in a fire-dependent ecosystem. Provide a summary of incentives to encourage public participation in emergency preparedness behaviour and provide information on government responses during emergency situations

As well, there was a call to offer improved training opportunities for those that face the wildfires across the province

Expand the provision of prescribed fire training and extend the provincial certification program to non agency personnel: Training and certification must include all support positions within agencies. Evaluate the applicability of Parks Canada burn planning course and the US RX-310 Fire Effects course

To better inform the public on Fire and Flood Dangers and awareness, the report offered up some suggestions to held keep the lines of communication open with the public.

Increase disaster awareness among British Columbians by leveraging existing resources, such as PreparedBC and expanding its reach to be more prominent, interactive and dynamic.

The document also calls for a more cohesive partnership between First Nations and local, provincial and Federal governments to ensure that all in British Columbia are better prepared for emergencies and to put in place the mechanism to help steer that process in the future.

The final commentary for the report is the belief that the recommendations provide the province with a road map towards future public policy in Emergency Management.

Some of the reviews of the report can be found below:


For more items related to the work of the Legislature see our archive page here.
Posted by . at 9:02 AM