Banner within their grasp: Rainmakers In Langley for BC Provincials


The 2019 AA Provincial High School Basketball Tournament gets underway today, the last stop on a fairly impressive season for the Charles Hays Senior Boys Rainmakers, with but only four days between Mel and Ryan Bishops' team and a Provincial banner.

The tourney which celebrates it's Fiftieth year this week, is the highlight reel showcase for high school basketball in British Columbia and has delivered many memorable showdowns and performances in many of those fifty years.

As we outlined on Monday, the consensus of observers at Provincials is that the Charles Hays Squad are the tournament favourite, bringing consecutive weeks at Number One in the province into the tournament; their work ethic steeled by some extensive testing against AAA and AAAA teams at tournaments through the season.

Among those that have marked the Makers' as a team to watch, is Vancouver sports journalist Howard Tsumura, who is looking forward to watching the Charles Hays boys this week in Langley. 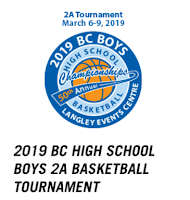 "Charles Hays is built to the stage right now where they have absolutely no fear even in the 4A forum they just walk right in there and they're just going to play whoever you put in front of them ... McChesney just a terrific talent, so you don't want to put any undue pressure on anyone, but if anyone can take the kind of expectation, based on their body of work it's Charles Hays"

You can follow his observations on all of the Provincial tournaments this week at the Langley Events Centre through his online journal Varsity Letters.

More notes on the tournament can be reviewed from the home page for the AA tournament, while updates through the four days of BC's version of March madness can be found through the tourney twitter feed.

Another source for notes on basketball in the province is the BC Hoop Scoop twitter feed, which will keep an eye on tournament developments from Langley.

Tournament action from the tournament can be viewed through the pay per view streamcast available here.

The Charles Hays Rainmakers are 2019 AA BC High School Champions

Basketball fans of the Northwest will also want to keep an eye on the AAA tournament taking place at the same time in Langley, Terrace's Caledonia will be pursuing their own hopes for a provincial banner through the week. The AAA tourney twitter feed is available here.

For a look back at the Rainmaker season see our Charles Hays Sports Archive here.