The newest addition to the fleet of the Royal Canadian Navy made a short show of the flag transit through Prince Rupert Harbour on Wednesday morning.

That as the HMCS Harry DeWolf travelled across he Prince Rupert waterfront passing by Mariner's Waterfront Park about 9:15AM, reaching Fairview Terminal by 9:30AM before heading for points west and south.

As we outlined yesterday, the vessel which joined the Royal Canadian Navy last year just completed the first navigation of the Northwest passage by a Canadian military vessel in over sixty years. 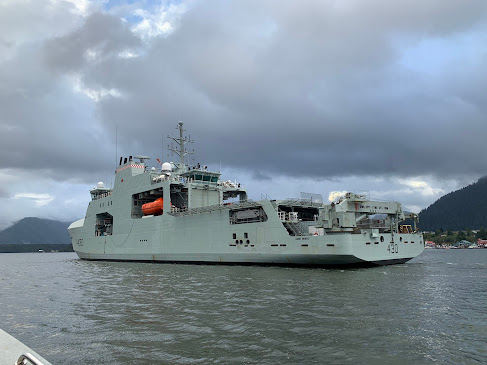 There was no port visit for the ships company of the Harry DeWolf, the vessel making a short detour of an hour into Prince Rupert waters, before continuing on its journey back to its home port of Halifax Nova Scotia.

Most likely they pulled into port to pick up some new crew members if only for the trip down to Victoria, yesterday the Prince Rupert Port Authority noted through Social Media of the arrival of two Naval official's in town, a visit that coincided with the transit of the DeWolf through North Pacific waters.

With the Harry DeWolf based out of Halifax, Nova Scotia, it's pretty unlikely that Prince Rupert will see the vessel again anytime soon, however with five more of the DeWolf Class of ships on the way, at some point in the future the Pacific fleet may have a few of the Arctic/Offshore vessels based out of Esquimalt offering a chance for a longer stay and a close up look.

As they depart Prince Rupert, the next few hours should put the vessel through some new paces, with a Marine STORM WARNING now in place for Hecate Strait and down to the Central Coast.

Winds of up to 55 knots are anticipated along with seas building to 7 metres, something which may see stocks of gravel decline on the DeWolf before they next tie up in a port.