A discussion Monday night at Prince Rupert City Council on the theme of how to improve local neighbourhood infrastructure through additional taxes for residents, morphed into a tutorial of sorts from Prince Rupert Mayor Lee Brain on council priorities on larger infrastructure needs.

The discussion switched over to the theme of infrastructure priorities following a lengthy period of review by Councillor Barry Cunningham on the prospect of making city residents pay for work on areas which the city has long since stopped maintaining owing to the city's financial challenges of the last decade.

From that talking point, the Mayor took to the debate with a fairly strong defence of the city's current focus on infrastructure spending, making mention of a number of the key items that have been brought to the top of the list in recent years.

"Councillor Cunningham, to understand the reason that this has come about is that yeah the whole town collapsed in the early 2,000's and lots of things weren't maintained moving forward.
Now if people want to wait for the city to prioritize laneways, well they'll be waiting until well after 2030.
Because with Watson Island, the costs and the Water Treatment costs, and Wastewater treatment costs and RCMP costs; we're talking hundreds of million dollars of city priorities going into those major infrastructures that these other areas aren't the top priority for city spending.
The reason why this has come about is to give an option to get smaller projects an opportunity to get funded quickly so that  people can see improvements in their areas.
And this isn't something that's uncommon, we're not some unique case here. I mean in fact we're one of the only municipalities that doesn't have Local Service Area  improvements. I mean our staff went out and researched a variety of other communities that have these policies in place.
If we don't have this in place, then yeah, you know if that's the case then everyone will be waiting for their laneways be redone, because they're not part of our major infrastructure program.
We already have priorities as Council, a 70 million dollar water project is our top priority and phase two coming to completion and Phase three hopefully beginning  next year.
And if its that versus doing it all at the same then we're going to have to choose our priorities, that's why were allocating resources wisely and effectively based on the priorities that we've already set up." -- Mayor Lee Brain at Monday's City Council session
As we noted earlier this month, when it comes to providing for updates on all of those long running infrastructure proposals, the City Council has been rather quiet and if they are going to use those infrastructure challenges as their litmus test on spending, they should recommit to more information sharing with the public on the progress and background of where each of those initiatives is currently at.

No one is going to argue with the Mayor on the theme of a top priority being our water infrastructure, particularly during yet another Boil Water Notice, as was declared by the City earlier this week.

But as we have suggested more than a few times in the past, an update on all of the elements of those initiatives is required, unless Council wants to lose the confidence and goodwill of a patient public waiting for deliverance from its water woes, among many other concerns.

If they are going to use the Mayor's range of projects as their bullet points on costly pieces of infrastructure, Council should provide all of the background information related to what has made them as costly as they have become and in a number of cases seemingly behind schedule.

Beyond the must fix items though, Council has also moved forward with some projects that perhaps are not at the top of many residents list of priority work and items of note which didn't make it onto the Mayor's snapshot of spending from Monday evening. 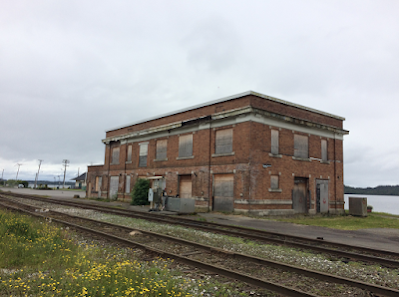 The plans to refurbish the old CN Station on the Waterfront for use as the new home for the Wheelhouse Brewery comes to mind, as well as the project to build a new ferry dock at the same waterfront location for the Airport Ferry, a transportation service that only has use once a day by the travelling public at the moment.

As well, there is the arrangement with Canadian Fish for Warehouse Space near Rushbrook that City Council never really explained why they needed, or what the financial impact might be on the city.

The same could be said for what the status is of the City's Legacy Corporation money and how the Council is using it,  or how the leasing of land at Watson Island is going, topics that Council has not been particularly inclined towards communication towards.

Beyond those there is the spending in many departments and Council initiatives that are launched that we rarely hear about from our council members.

Whether it's increased staffing in newly created positions, or initiatives like a rebranding program, or in the case of the garbage and recycling plans, a program which has been paused after a troubled launch, Council members should be discussing those themes in the their public meetings.

And while many are items that Council has said in the past won't come with a cost to the taxpayers; residents may wonder why their council members don't focus on using staff time and resources seeking out funding grants and other avenues of financing for addressing areas such as roads and other civic work that residents may identify, if asked, as more important.

And to bring it all back to the Monday discussion, work on local improvements in neighbourhoods that have been long neglected as Councillor Cunningham made note of.

Council members may find it a hard sell for the public when it comes to asking for more of their money in taxes for neighbourhood fix up items; while using up staff time and council resources in pursuit of grants for items that most in Prince Rupert probably would be able to do without, especially if it meant addressing more pressing issues of common concern.

You can review the Mayor's state of the infrastructure commentary from the City's Video  Archive page starting at the 18 minute mark.

More notes on the Monday Council session can be reviewed here.

A wider overview of some of the key themes from the Monday session is available here.

For a look at the city's infrastructure challenges and success of recent years see our archive page here.

A review of past Council discussions can be reviewed from our archive page.