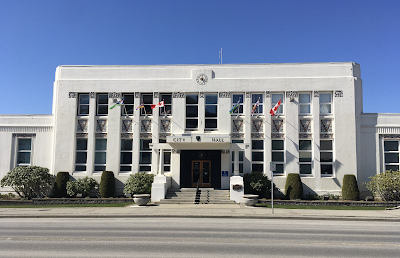 Prince Rupert Mayor Lee Brain followed up on yesterday's BOIL WATER Notice of 5:30 Tuesday evening, with his own shorter missive posted to his Facebook page one hour later, his first real substantive notice on any topic since Labour Day

For the most part, the Mayor's talking points on the water issues could just as well have been copy and pasted from three years ago when the ongoing string of off and on Boil Water issues began to accumulate for city residents.

Complete with finger point bullets to show that it's important news we imagine, the Mayor offered up some short recaps of the current situation as well as the thanks from the City for the community's patience. 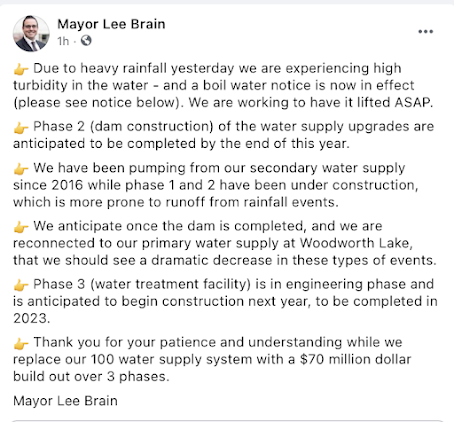 Yet, from that short burst of recycling on the water issue, the Mayor neglected to include much in the way of details to provide a complete  picture of where we are in our ongoing troubles with our water supply.
As we noted earlier this month, that at the time of a previous water advisory for residents of the west side Graham Avenue/Atlin area, we observed that with the annual heavy weather season about to arrive, that City Council should provide a complete overview of this ever increasingly delayed completion of the dam project.
The initiative one that was the focal point for the Mayor's Hays 2.0 showcase from 2015 and a topic that has long since faded from the discussion themes for Prince Rupert City Council, with little in the way of informative updates on the progress of the project provided byCouncil, towards its completion.
The latest bullet point states an anticipated completion of the dam project by the end of the year.
But really, city residents long patient as they have been, deserve much more of a firm completion target  beyond the collective shrug from Council of maybe by the end of this year.
Many questions come to mind on the topic, as residents once again put the latest pot of water on for a boil, or head off to the city's retail stores to stock up on flats of bottled water.
Among the areas of note for the City's elected officials to offer up a full explanation towards include:
What has caused the delays, an update on the cost of the dam and if these delays have increased the cost of the project, as well as how any cost increases would be addressed if required.
As well there is a need for a wider overview towards how we have travelled the path of the project from its announcement as part of the city's water infrastructure ambitions, along with the challenges, successes and disappointments along the way should make for part of that presentation.
The Mayor and Council had a chance to get ahead of the Rainy season this past Monday, that as the rain pounded down on the city, the council members hosting their only Council session for September.
The larger view of the many civic infrastructures currently in motion was briefly touched on during the Council discussion on the night, though mostly as a sidebar to another topic on local neighbourhood improvements and how residents should pay for them.
Yet at that session the Mayor did not take advantage of his platform of a public council session to deliver an update on the 70 million dollar water project, nor did the council members for their part provide for any questions as to its status.
Rinse and Repeat ...
Considering how our weather of October and November is likely to deliver more of the same as was seen from Monday's heavy deluge,  maybe the October Council meeting may spur the city's elected officials on to some actual information sharing.
The ongoing themes of the water infrastructure story can be found from our archive page.
An archive of the notes on this latest Boil Water Advisory is available here.
A review of past Council discussion themes can be explored from our Council Discussion archive.