Last week we noted of a call from Prince Rupert City Councillor Nick Adey to bring the providers of Emergency Services in the community to the Council chamber for some discussions on issues or concerns related to their work, an initiative that would be a welcome addition to the information flow for Prince Rupert as long as it's part of a public council session and available to all residents for review.

While we wait to see if that proposal is successful or not, the Mayor and Council Members may want to provide an update of their own on another initiative from last year that they had expressed some enthusiasm for, but one we haven't heard much about since that time.

In January of 2020, the City Councillors hosted a presentation from Ms. Shannon Tucker of the Provincial Office of Crime Reduction and Gang Outreach.

The topic was a provincial program called the Situation Table and the presentation was one that brought a large volume of questions from the Councillors at the time, as they explored how the program may work in Prince Rupert.

As part of our review of that 2020 session we noted the following:

As for what it could offer Prince Rupert, Ms. Tucker took Council through the various elements of the Situation Table process, highlighting how it is designed to help all agencies build and sustain multi-sector collaboration.

She noted that 50 to 70 percent of calls for Police service are for issues that are for non-chargeable or not criminal in nature, with the table designed to reduce that load on the police and deliver those people to the services that they require.

The goal of the program is to work towards Risk intervention, that would identify and reduce the risks that are present in the lives of vulnerable people.

The make up of the Situation Table would consist of a number of participants, including Police, School District, Social Services, Health Agencies.

They would meet regularly for 60 to 90 minutes, with each individual situation allocated 6-8 minutes for discussion through a pre determined protocol.

Any plan for intervention would come within 24-48 hours of reaching the situation table. 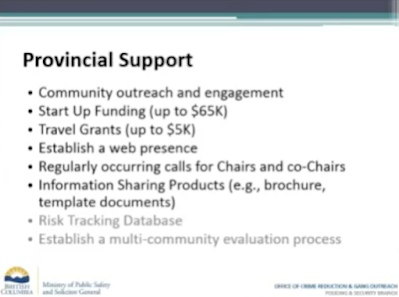 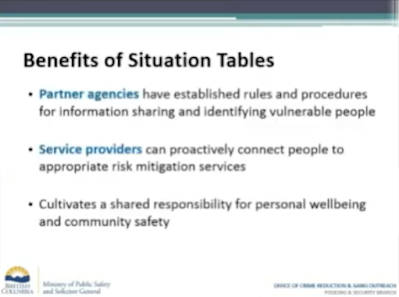 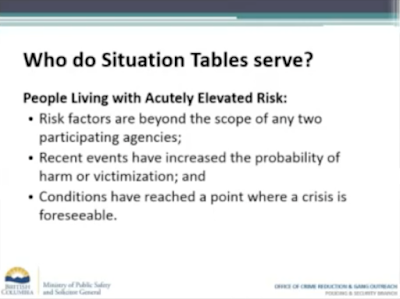 The 2020 Council session seems to be the last time it was mentioned at a Prince Rupert Council meeting, with no follow up noted provided since as to whether the City has moved forward to explore the plan further.

At the time of the presentation eighteen months ago, the closest community to Prince Rupert to use the Situation Table was Williams Lake, but since then, it has become something that a number of Northwest communities have adopted.

Both Terrace and Kitimat have joined the program, with Kitimat signing on to the program in August of this year.

Last week, Stikine MLA Nathan Cullen outlined how communities in the Upper Skeena region would be joining the program to address issues in the area. 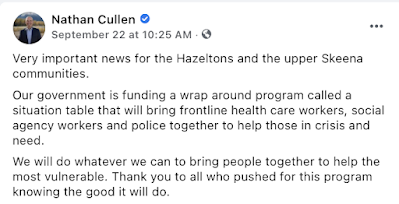 The province expanded on the Stikine funding with this information update,.

“As we’ve seen with various situation table groups across the province, they’re an important tool to offer different resources to those at risk of crime and gangs, as well as substance abuse and homelessness. By investing in situation tables, we’re giving service providers the tools they need to provide rapid support to at-risk people, while freeing police resources to focus on other duties.” -- Mike Farnworth, Minister of Public Safety and Solicitor General

A list of those communities  which had been making use of the program prior to the Kitimat and Stikine announcements can be reviewed here.

More on the program can be explored here.

Since Prince Rupert seems to have many of the elements of concern that the program seeks to address, hopefully, the Mayor and Council will have some news to share in the future on the program, or at least an explanation as to why it may not be workable for this community.