Back to the Boil Water Orders for Prince Rupert 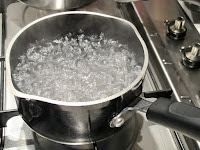 It will be a sense of Deja Vu for Prince Rupert residents tonight's as the City of Prince Rupert brings back another BOIL WATER NOTICE for the entire community, announcing the measure at 5:30 on Tuesday.

The notice posted to the City of Prince Rupert Facebook Page notes of High Turbidity in the city's water supply that following the extensive rain event of Monday.

A high turbidity level may impair the effectiveness of the disinfection treatment system. If disinfection is impaired, disease-causing microorganisms may escape into the water distribution system resulting in an increased risk of intestinal illness.

As a result the City is advising residents and businesses that a Boil Water Notice is now in effect for Prince Rupert until further notice. A Boil Water Notice means that residents and water system users must heat the water to a rapid boil for at least 1 minute then cool and place in a food grade storage container.
This must be done in advance of consumption for brushing teeth, drinking and cooking, washing vegetables for consumption raw, and making ice. Use of water for bathing and washing clothes is considered safe without boiling.
The city notes that once again it is working diligently with Northern Health to safely lift the notice as soon as possible. City officials have also thanked the public for its patience with this matter and will provide updates on their progress towards lifting the notice as soon as they are available.
The full advisory from the City can be reviewed here.
The Notice has also been posted to the City of Prince Rupert website.
Prince Rupert has had on and off Boil Water Advisories for much of the last three years as work continues on the City's Water Dam, which has required the city to use its secondary source of water for the community.
The long running issues for water of 2018-19 lasted forty three days over the Holiday period.
Another weather related boil water order was issued in October of last year, which offered us a chance tor review the situation at that time.
More notes on the city's water infrastructure can be reviewed here.
You can track all of the media coverage of this latest Boil Water Advisory from our archive page here.
Posted by . at 6:12 PM