An opportunity to learn more about the workings of the Fairview Container Port come up tomorrow morning when the Port continues on with an online webcast series at 11 AM that will explore how the Terminal has maintained its fluidity through a challenging environment.

In just the last week some of the elements of the success of the Fairview Terminal have been highlighted, with CN Rail noting of the speed of turnaround that gets goods from Shanghai, China on their way to markets deep inside the United States. 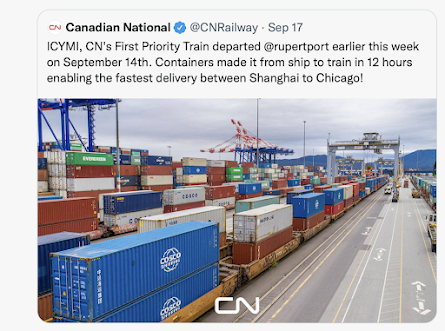 The Port also celebrated the arrival of the largest container ship to ever call on the DP World Facility, that happened on September 22nd when the MSC Auriga arrived for unloading at Fairview. The vessel is part of a new SAN service line and has a capacity of 15,000 TEU's
Last week's information flow also included the release of the Prince Rupert Gateway Council report on the economic impact of Port Operations on the North Coast, which as we noted here, provided a pretty thorough snapshot of the volume of cargo throughput, job creation opportunities and benefits to communities that have come with the increased amount of terminal options across the Northwest.

Tomorrow mornings session will feature Chris Colussi, Terminal Manager at DP World Prince Rupert he will join Girish Nair, the Assistant VP of International Intermodal CN and the Port's Jeff Stromdahl, Manager of Trade Development for the PRPA as part of he lineup of presenters.

The invitation to the event offers this outline of what to expect during the course of the discussion.

Join us for the second installment in this industry-led webinar series covering an update on the Port of Prince Rupert’s Intermodal Gateway Ecosystem.

From rail, to reach, to operations, infrastructure, and expansions, an exciting and dynamic panel of experts will walk you through DP World Canada’s Fairview Container Terminal and its fluid and uncongested performance, while sharing the array of investments happening at the Port of Prince Rupert to add capacity ensuring Prince Rupert’s position as a growing global gateway for North American trade.

Hear first-hand how the Port’s fast and reliable intermodal ecosystem is expanding to meet the demands of the future right now, and unlike any other port on the West Coast, has remained uncongested in 2021.

The Portcast series requires participants to register and you can do that from this link.

More notes of interest on themes related to Fairview Terminal can be explored here.

While topics related to the Prince Rupert Port Authority can be found here.