Election Day 2021 ... The Polls are open and voting is underway

The candidates have done their part, now its up to us, as the 2021 election campaign reaches the finish line after thirty six days.

The polls opened at 7AM across British Columbia, with voters in the Prince Rupert area trickling in to the Jim Ciccone Civic Centre where as in years past, the community polling station has been set up.

The voters having until 7PM this evening to cast a ballot in this  election, one that seemed to spark as much in the form of resentment and anger as it did in optimism and vision for the future.

The voter turnout today perhaps as much of a referendum on the need for the vote, beyond the vote totals that will deliver a new government by the end of the night.

When it comes to that voter turnout, how many Prince Rupert voters make it to the polls today will be well worth watching, with recent results of the past making for a disturbing trend downwards in voter participation.

In October 2019 across Skeena Bulkley Valley there were 41.651 ballots cast,  a total vote number that that was down from the 44,266 ballots that were counted in October of 2015 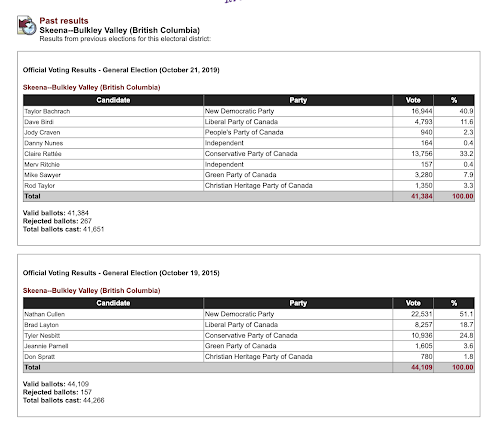 In Prince Rupert, the 2019 vote saw just 3,864 voters cast a ballot, that number a small portion of the 10,633 potential electors that Elections Canada had listed as eligible to vote two years ago.

Environment Canada is calling for heavy rain for much of the riding on this Election Day.

That leaves it all to the weather Gods in the end to deliver the final verdict on voter participation for the 2021 election that few seem to have wanted in the first place.

You can work on your own region of the Skeena-Bulkley math election math of the past by reviewing the entire listings for constituency from the Elections Canada website.

The results will begin to roll in from the East later this evening, with the British Columbia voting results to begin to arrive sometime after 7PM.

For those looking for a review of the 2021 campaign in Skeena-Bulkley Valley see our archive page here.

It features a compilation of items of note, from archives of the debates across the riding, to regional coverage and our own contributions to the electoral debate, including our final article on the campaign from Sunday.

For a look back at the national campaign, we have collected a large archive of national notes through our Political blog D'Arcy McGee.