The first new Royal Canadian Navy Vessel to be built in Canada in almost three decades will be on display in the waters of Prince Rupert harbour tomorrow morning as the HMCS Harry DeWolf an Arctic/Offshore Patrol vessel makes a side trip to Prince Rupert on its way to Vancouver, Victoria and points further south.

The newest member of the RCN fleet will be conducting some local operations from 9 to 10 AM along the Prince Rupert waterfront.

The Halifax based vessel has just completed a transit of the Northwest Passage, the first Canadian Naval Vessel to do so in over sixty years, the transit of the Arctic waters included stops in far north communities and allowed the ships company to develop the operational capability that marks the increased presence that the Royal Canadian Navy intends to bring to the North. 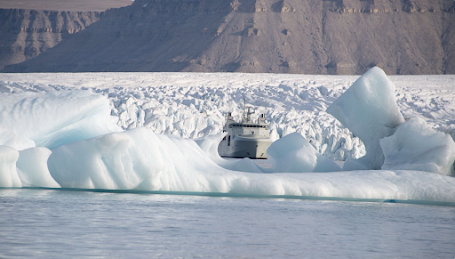 The 65 sailors aboard the Harry DeWolff will also get  to enjoy the polar opposite in weather of what their last six weeks at sea offered; that with a transit through the Panama Canal, that will be followed by some work with  a number of navies and Coast Guard vessels in the south on drug interdiction operations in the Eastern Caribbean region.

From there the vessel will sail north to its home port in Halifax.

Built at the Irving Shipyard in Halifax, the Arctic/Offshore Patrol vessel went into service last year and conducted a year of sea trials prior to this current tour through the Arctic and down the Pacific coast.

It is the first of six similar vessels that will add to fleet capacity for the Royal Canadian Navy, all six are part of the DeWolf Class of ships, named after the RCN's  Vice-Admiral who commanded two vessels HMCS St Laurent and HMCS Haida during the pivotal years of the Atlantic campaigns of the Second World War.

You can learn more about the vessel here.