The City of Terrace has provided a bit of a blue print for other Northwest communities this week, providing a fairly extensive overview of its plans in observance of the National Day for Truth and Reconciliation tomorrow, with the City and its council members touching on a number of areas of note when it comes to this first observance of the day. 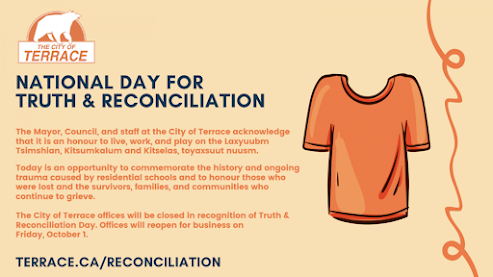 As part of their information sharing themes of earlier this week, Terrace officials provided for the foundation of what they describe will be their guide to future action and decision making related to reconciliation.

“The City of Terrace values the Indigenous peoples of the area and seeks to build strong relationships founded in trust and respect. We are committed to reconciliation, founded on understandings of truths experienced through colonialism, residential schools, and systemic racism.” -- Some of the text to the City of Terrace Statement of Reconciliation from September 27th.

Through their statement, the City of Terrace also outlined a recent initiative that it had put in place with the purchase of a flag in observance of National Truth and Reconciliation Day, which was raised last week.

The flag was raised on Tuesday, September 21. In future years, the City’s flag policy will be updated to include raising this flag for the entire month of September.

The Terrace Council found itself in the spotlight earlier this year, when City Councillor Jessica McCallum-Miller, the First Indigenous resident to take office, resigned her position, the Councillor citing systemic and Internalized Racism, as well as sexism as her reasons for taking leave of her seat at the Council Table.

At the time, Ms. McCallum-Miller penned an Open Letter which outlined the physical and emotional toll that her experience in elected office had delivered to her and led to her decision to resign her post.

With that past history part of the current Terrace narrative, the remaining Council members clearly heard a view that some change was required and their moves of this week would seem to be the start of renewal for the community.

The occasion of the first Day of National Truth and Reconciliation the moment of note that indicates that their work on reconciliation has seemingly begun, though many residents of the region will be watching to ensure those commitments are kept and built upon.

More notes on the approach Terrace is taking towards reconciliation can be explored here.

The District of Kitimat also took some action earlier this month in recognition of Truth and Reconciliation, flying their own Orange Flag, which will remain part of the District's Flag Display until the end of the day on September 30th.

Earlier this week we also took note of how the North Coast Regional District has observed the currents of the Day  of National Truth and Reconciliation.

"We are located on the traditional territory of the Haida and Tsimshian and we benefit from the rich First Nations cultures that we are surrounded by. We will continue to prioritize building relationships with First Nations governments in the region and support truth and reconciliation efforts" -- Barry Pages, Chair, North Coast Regional District from a statement from September 1st

Some further notes on how the week has been observed in the Prince Rupert area and what may be planned for Tomorrow can be reviewed here.