Some Notes for resumption of the 11th Avenue East Public Hearing shared on City of Prince Rupert website ... sort of

When we last left the discussion on the plan to resume the suspended Public Hearing for the Lax Kw'alaams led 11th Avenue East Apartment proposal, Mayor Lee Brain had been outlining the city's plan for information sharing on the topic in advance of the proceedings, with Council planning to pick up again in October, from where they left off on August 23rd.

"Given that what we heard at the last public hearing about information not becoming available to residents. I would appreciate if, we can make the effort to make sure that this information gets to those who have raised concerns hence... So,  what I don't want at the next public hearing, people to come and say that they never had access to this information and  don't want them to have to dig around in a council agenda to try to find a technical memo.
So what I would request is if we could potentially extract this memo put it on our city website and the, we have emails of individuals who are interested in this project and make sure that they are given this directly and that we accommodate this information" -- Mayor Lee Brain speaking during the September Council session on the process of getting information to those with an interest in the proposed 11th Avenue housing development.

And so far, the City has made some progress towards that sharing of information, though finding it may still be somewhat of an Easter egg hunt for those that require it most.

City staff have provided for a copy of a technical report from McElhanney Engineers, one which focuses on the traffic concerns relayed pervious, though accessing it requires a 'bit of digging around' the city website, with the document only available to this point so far from the Council Meeting archive page.

An even larger and wider in scope report from the city's contract planner Rob Buchan, has not as of yet been selected by the city for inclusion in the latest round information sharing, so to be helpful we've provided that report below taken from the September Agenda package for Council members. 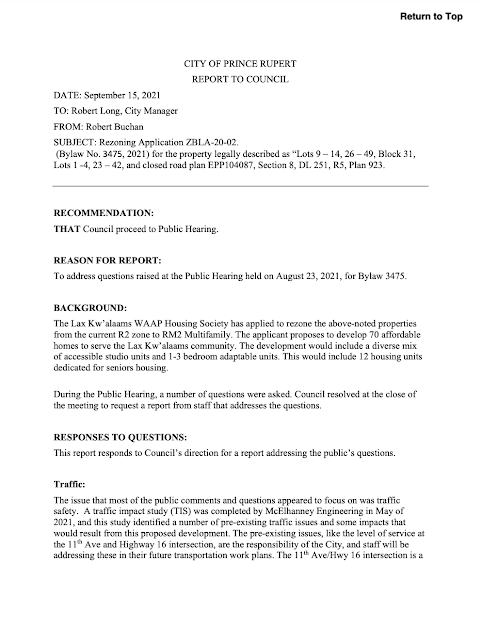 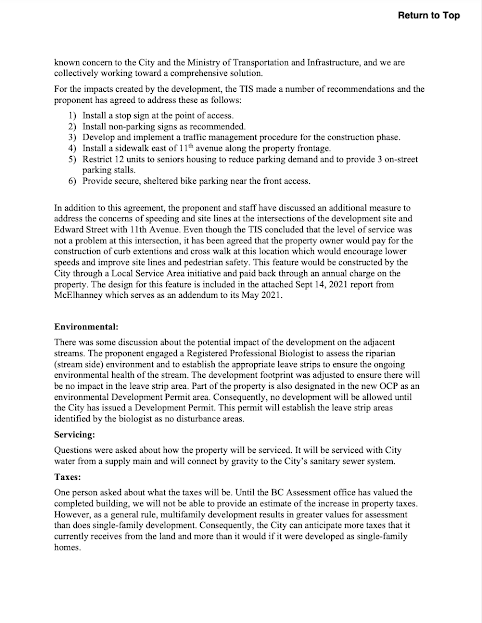 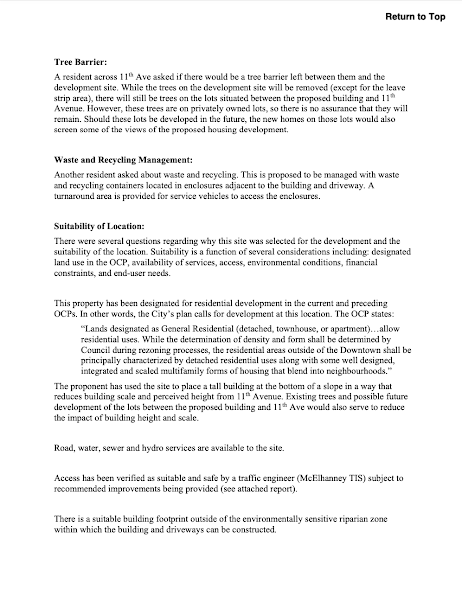 Also missing from the information rollout so far is a follow up on the suggestion to use Social media to highlight the research material, with no mention of the documents on the city's main page to the website or through the Social Media streams that are used for such information sharing.

Though as the Mayor noted at the September Council session, residents of the immediate area that have left their email addresses with the City should check their in boxes to see if a correspondence from the City staff has arrived.

As for the Public Hearing, the resumption of the Suspended Hearing is set for this coming Monday, October 4th.

And, with new measures related to COVID being observed by City Council, unlike the one suspended in August;  it seemingly will not be an "In Person" session but rather a return to that of remote access and an online presence for the event.

"One of the challenges we have now is that we're not allowed to have, we have to have a limit of indoor gatherings and under legislation we actually can't limit anyone's ability to participate in a Public Hearing.

So what we don't want to be in is a situation where we have turn people away at the door ... if we're at capacity. And so at this stage what we've decided to do I think is have a Virtual Public Hearing" -- Mayor Lee Brain at this month's Council session outlining the City Council's intentions as to how they plan to move forward with the 11th Avenue East Public Hearing

So far however and with less than a week to go until the much anticipated session, the city has not released any details through the city Website or Social media on how those looking to participate in the hearing can gain access to the virtual event.

You can review the Council work on the 11th Avenue file from earlier this month from our Council Session archive page.

A wider overview of housing themes in the region can be explored from our archive page here.