Members of The Royal Canadian Marine Search and Rescue organization were honoured over the weekend for their work across British Columbia and among the many volunteers recognized for their dedication to our safety were seven members from Stations on the North Coast and Haida Gwaii.

The Northern Awards went to members from stations in Prince Rupert, Kitimat,  Lax Kw'alaams and Haida Gwaii and were in recognition of a number of areas of service to the marine community.

In Prince Rupert Station 64's Max Erwin received the CEO Commendation for his work on the North Coast. The CEO Commendation Award is a distinctive award given to an individual who displays extraordinary dedication to duty and strength of purpose in pursuit of saving lives on the water.

The work of four members of Lax Kw'alaams Station 65 was recognized with Reuben Dennis, James Henry, Darrin Tait and Keith Wesley all celebrated for their Long Service of 25 years.

In Kitimat, Station 63 member Duncan Peacock was also recognized for his lengthy time in service receiving the accolades for 30 years on the waters of the British Columbia Coast.

On Haida Gwaii Chris Ashurst of Station 45 at Masset was awarded the Canadian Coast Guard Auxiliary Administrative Award of Excellence.

The weekend virtual event as seen from the photos above, was shared through the Royal Canadian Marine Facebook Page, which provided more background to the celebration of the work of over 40 members of the Marine service in the province.

The Awards were organized by the RCM SAR Board and the Joint Rescue Coordination Centre in Victoria.

Volunteers of the RCMSAR provide service along the BC coast at more than 30 stations, ready to respond to any marine emergency that they are dispatched for. 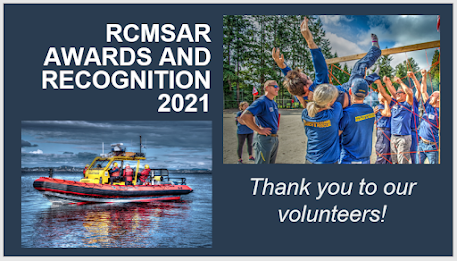 Included in the tribute were some words from Lieutenant Governor Janet Austin who paid tribute to the volunteers and the leadership that they show across the province. 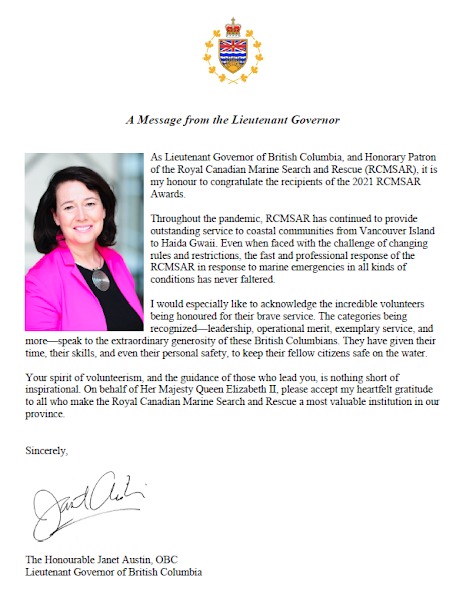 You can review the photos and notes of the weekend from Royal Canadian Marine Search and Rescue here.

For more notes related to the work of Emergency Responders in the Northwest and on Haida Gwaii see our archive page here.