Progress it appears has been made to resolve some outstanding issues between Canadian and American officials when it comes to the Alaska Marine Highway connection between Prince Rupert and Ketchikan.

A report from Alaska Public Radio indicates that officials with Public Safety Canada and Customs and Border Protection in the United States have come to an agreement to allow US customs  officers at the Prince Rupert terminal to be armed, that once the Prince Rupert facility is declared as a certified "pre clearance" facility.

That change will come as part of a bilateral agreement that was signed back in 2015 that allowed for US agents to be armed while working on Canadian soil, but did not include Prince Rupert at the time it appears.

So far, the Canadian agency has not issued any public statement towards that advisory, though a representative did speak with Alaska Public Radio as part of their story.

The issue of safety of US Customs and Border Personnel back in 2019 led to the AMHS suspending its transit to and from Prince Rupert, that service stopped in the fall of that year and has not resumed in the years since owing to COVID and the closure of the Canadian border.

John Falvey, the Alaska Marine Highway General Manager told Alaska Public Radio that the marine service hopes see the new pre-clearance arrangement in place in Prince Rupert to make its return to service to the North Coast as of May 1st 2022.

The full Alaska Public Radio report can be reviewed here.

As we outlined in August, Alaska Marine Highway System Officials had hinted towards the progress on resolving the pre clearance issue, leaving space open on their summer sailing planning for inclusion of the return to service to Prince Rupert. 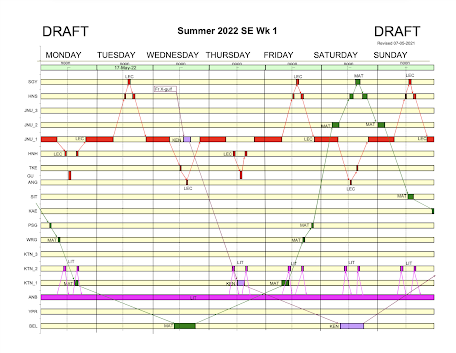 The Alaskans indicated this week that the May service would be twice a week should everything fall into place for the return to Prince Rupert.

One thing is certain though, should the service resume, harbour watchers won't be seeing the once familiar sight of the Malaspina coming into port, the vessel has been removed from service and currently is berthed at the Ward Cove facility in Ketchikan, her fate still to be determined by Alaskan officials.

So far there has been no word from Prince Rupert Mayor Lee Brain, who has been engaged on the file in recent years seeking a return of the AMHS service to the North Coast.

In September of 2019 Mr Brain had outlined plans to try to have the Alaskans reverse their decision, though at the time the US officials remained firm on their calls for armed police at the Prince Rupert terminal and in their plans that led to a shut down of service of close to two years got underway.

The news will be a welcome one for those in the tourism, hospitality and commercial sector in the city, the volume of travellers passing through Prince Rupert towards Alaska, particularly in the summer months was once an important element for those operators.

So, should the planning come to a successful conclusion, May may bring a chance for Prince Rupert and Ketchikan to renew their acquaintances and get back into the business of moving people across the A/B line.

More notes on the Alaska Marine Highway System and Ferry issues in Prince Rupert can be reviewed from our archive page.