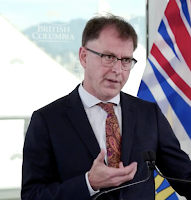 In his data review, the Health Minister noted of 12 critical care patients, 9 of whom are COVID-19 position having been transferred from the North to hospitals in Metropolitan Vancouver and on Vancouver Island.

Health care providers have also added 15 bed capacity in the southern regions as a result of the current situation as a way to assist the North during this period of time.

That measure is required as health facilities primarily in the eastern portion of the Northern Health service region at Prince George and Fort St. John, feel the strain and the burdens that the pandemic is placing on health care staff in those hospitals.

To reinforce the gravity of the situation, Mr. Dix observed how the Health system makes these transfers out of home Health Authority's with great reluctance; but for now at this point of time in this fourth wave of the pandemic, it is the path required to relieve the stresses currently being found in Northern Health.

The decision to transfer patients comes as Northern Health finds itself in the midst of a surge of COVID-19 that is six times per capita more than any other Health Authority in the province.

The concerns for the Health system in the North made for much of the narrative of the Tuesday information session with Mr. Dix and Doctor Bonnie Henry. 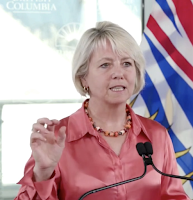 Doctor Henry addressed concerns over the stress of the Health system in the province, observing that health care in BC is not at the breaking point, or close to it, but added that it has been a very difficult period for health personnel in all of the province's Health Authorities.

In addition to the moves related to the North, the Health Minister relayed the list of concerns that the fourth wave is delivering to health care in British Columbia.

Included on his list, the growing list of cancelled surgeries owing to the volume of COVID-19 patients in hospital at the moment, the majority of them unvaccinated patients.

In the Northern Health region, health officials have had to postpone 167 surgeries in the period from September 5 to 18th, owing to the ongoing effort towards care for COVID-19 patients.

The health Minister also used the information session to once again urge British Columbians to get vaccinated for the COVID-19 virus.

Mr Dix noted that as of today there is only 13.2 percent of the population un-vaccinated stressing the urgency for British Columbians to register for their appointments as soon as possible to ensure protection for they and their families, as well as the one way that all British Columbians can provide support for the Health care professionals across the province.

However in the North, the vaccination rate is significantly lower with only 65 percent of those 12 years and above fully vaccination across the NHA, with the percentage even less in the North East region, all of which is contributing to the increasing rate of hospitalization.

The Health Minister did make note of the range of vaccination results found across the North, noting of the success of the program in some areas of the Northwest paying tribute to the effort found in Prince Rupert,  Kitimat, Haida Gwaii and Nisga'a areas to name a few, which has meant a much lower rate of infection than other areas of the Northern Health Authority.

In addition to the frequent calls to register for vaccinations, the Minister, also outlined the scope of the additional measures as part of the contract tracing program that is being put in place across the province including the Northern Health Region.

The two health officials also outlined that they will be adding on to the measures towards informing schools and parents of COVID situations in the education system.

You can review all of the Health Ministers themes for discussion from the video below:

For updates on the status of COVID-19 in the Northern Health Region and across the province see our archive page here.

Health themes specific to Northern Health can be reviewed here.