Workers at one of the largest employers in the Northwest could soon be back on the job, that after weekend bargaining delivered a tentative settlement in the nine week labour dispute at the Kitimat plant for Rio Tinto.

The announcement of an agreement, still to be ratified by UNIFOR members was announced over the weekend, with few details released as to the terms of the deal following the last few weeks of renewed bargaining. 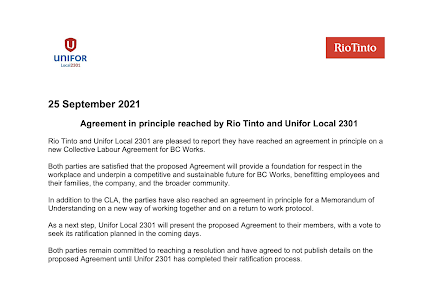 Unifor Local 2301 had served strike notice in late July following a month of bargaining sessions that did not provide for the conditions necessary for a labour agreement.

While the first month of the dispute had passed without too much concern from regional officials, as the dispute moved into its second month and with fall the on the horizon, more and more voices in the Kitimat area and beyond had been calling for the two sides to return to the bargaining table to bring the dispute to an end.

The final few weeks leading up to the settlement were periods of few updates from either side of the bargaining table as they pushed ahead towards the settlement.

The two sides note that they won't be publishing any details of the tentative agreement until after the ratification process is complete, that should come most likely by the end of this week.

You can trace some of the timeline of the dispute from our archive page here.