Approaching storm to make for much wind, much rain for North Coast and points inland

What appears to be a significant atmospheric stream of precipitation is on its way to the North Coast, wth Environment Canada anticipating rainfall amounts near 90 to 100 mm before Tuesday morning for many areas of the region.

Along with the extensive period of rain will come some wind, with Southeast winds blowing in at 50 km/h with to up 70km/h gusts over exposed areas at times during the height of the weather's arrival.

As the weather system prepares to make its way eastward first passing over Haida Gwaii before reaching the North Coast the first of the Rainfall Warnings have been issued.

Though interestingly for residents of the Prince Rupert area, the first communities to be put on alert were the Kitimat, Terrace region, which suggests a potential landfall further south on the North Coast.

Those notes include a potential rainfall of 60 mm near Terrace and 90 mm further to the south in the Kitimat region. 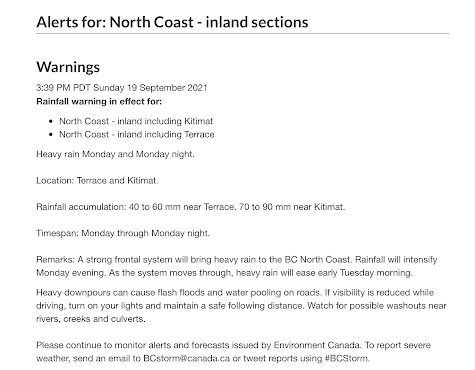 Should Environment Canada amend the forecast to include the Prince Rupert area in the Weather warning, we will update this page, you can also follow our twitter feed for further alerts should one be delivered.
Regardless of the volume of rain that may arrive in the Prince Rupert area, homeowners can do a little preventive maintenance before the system hits.
Ensuring that any loose items are secured and that storm drains in front of homes are clear of debris to allow for a faster flow for the water to drain off the city streets in your neighbourhood.
The forecast for the Prince Rupert area looks as follows: 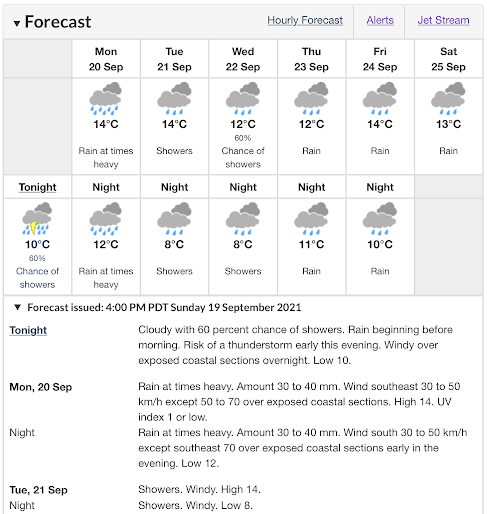 As we noted earlier on Sunday afternoon, such is the strength of the approaching weather, BC Ferries has moved ahead the scheduled departure of the Northern Adventure, which now will leave Skidegate at Midnight a full ten hours earlier than its original sailing time of 10AM Monday
More notes on weather issues can be found from our archive page here.