For the most part, the 2021 Federal election is the campaign most, other than those running for office seemingly did not seem to want, the enthusiasm for the campaign at somewhat of a less than fever pitch for those being asked to vote.

The final verdict on whether civic duty wins out to be delivered sometime early tomorrow evening; or if some election observers are correct, much later in the week, should the mail in ballots make for a significant impact.

Most of the six declared candidates in the Skeena-Bulkley race, at least can say they were actively engaged in the quest for our votes, the Liberal candidate perhaps not so much; what with a late entry to the campaign by acclamation and then by way of an unusual campaign strategy that only saw Lakhwinder Jhaj appear for selected media interviews late in the final few days for the 2021 vote.

The other five candidates in Mr. Bachrach, Ms. Rattée, Ms. Young, Mr. Craven and Mr. Taylor at least managed to take part in much of the traditional campaign process, whether it was knocking on doors, or participation in a number of debates hosted across the vast expanse of the Skeena-Bulkley riding, though for the first time in a long time with no actual debate hosted in the Prince Rupert area.

Some of the candidates making for much more of a presence in communities than others, as the campaign began to hit the homestretch of the last few weeks.

Mostly it has a been a campaign of social media bursts, robo calls to your home or cel phone, home mailer pamphlets, occasional media advertisements and lawn or high profile area signs.

Though when it comes to the latter, the enthusiasm for this election campaign is seemingly reflected by a significant  decline in those billboards found across Prince Rupert. 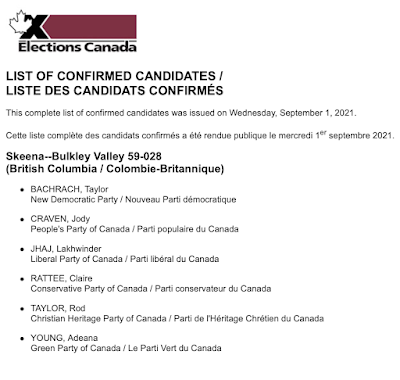 If you're still sitting on a political fence, you can do a bit of last minute research on the campaign from our archive page found here.

Among the items we've collected over the course of the last six weeks, some of our original campaign themes, notes from the media sources of the region and links to three of the four debates that we became aware of through the campaign, the Burns Lake event one that suffered technical issues and is not available for review.

Though for the most part, not much new was revealed through those campaign events, mostly the candidates held firm the themes we already knew them for, with little in the way of any revelations to learn from it all as we edged closer to the vote count on Monday.

The key issues for the riding did get some mentions along the way whether in debate or through Social media, but the larger focus of the national campaign seemed to invade the local discussion, something which will send voters more than likely back to their familiar voting patterns.

The last bit of polling data from 338Canada suggests that the NDP and Taylor Bachrach will hold the Skeena-Bulkley Valley riding, indicative of the strength of party in the Northwest and its ability to get the vote out on Election Day.

Though, that determination really is up to you, and whether you endorse the last two years of parliamentary work for the incumbent, or if one of the challengers may provide more of a reflection of what you wish for the region.

Some of the key things to watch for when the count comes in, whether there is any kind of surge in support for The People's Party of Canada in Skeena-Bulkley Valley and Jody Craven, which would more than likely have the largest impact on the fate of the Conservatives in the region.

The prospects for the Green Party vote are also likely in some flux, and whether it stays loyal will be another theme for the vote count for Adeana Young On Monday. That after the National party made news mostly for its internal party struggles of late, something that overshadowed the local campaign for much of the last month and a bit.

As well, what will become of the Liberal vote after a rather curious campaign, with at least 10 percent of the riding having voted Liberal in the past, it will be interesting to see if those voters continue to support the party brand. With those Liberal election themes championed  by long distance candidate Lakhwinder Jhaj, or if Liberal loyalists become free agents and to which other candidate that vote may drift towards.

Christian Heritage candidate Rod Taylor, will not be the MP for Skeena-Bulkley Valley, his path to victory an unlikely one as it has been in his many previous attempts for office, focused as he was on only a few issues of note that highlighted the sharp divide between his campaign and most of the other candidates.

Finally for Conservative Claire Rattée who ran an energetic campaign and has benefitted from her previous run for office two years ago, the prospects at the polls may depend on how voters have interpreted some of the National themes from Leader Erin O'Toole and how it all could impact on the riding in the Northwest. 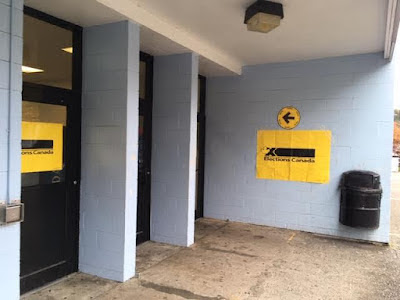 For those who did not vote in advance polls or mail in their ballots, the opportunity to make that important mark on the ballot and affirmation of democracy comes tomorrow starting at 7AM, with the doors to the Voting room at the Jim Ciccone Civic Centre closing at 7PM.

For those in other areas of Skeena-Bulkley you can find the location for the General Vote tomorrow from the Elections Canada Website.

Considering that BC is home the last of the constituencies to vote, the outcome may very well be known by the time we check in on election night.

Then again if the pollsters are correct in their prognostications of a very tight race that will go down to the last minute, the vote count from BC, including that of Skeena-Bukley Valley very well may be the difference between who becomes not only our next MP, but which party will lead the country once the final verdict is delivered.

Whether weary of the campaign or not, the opportunity for a say in how government is formed is becoming a rather rare thing around the world, it still holds true however in Canada as one of our treasured instruments of Democracy.

So, on this Election Monday 2021 make sure you vote not just for the candidate you believe in, but towards ensuring that participating in elections is never something we take for granted.

The latest journey for the democratic process began on August 15th  and it finishes, hopefully sometime before midnight on September 20th.

In addition to our local campaign notes here, you can also get a sense of the national campaign from the archive pages of our political blog D'Arcy McGee, where we have chronicled the current of the campaign through our Ottawa Observations feature.