Some welcome news for air travellers looking to book flights for Family for Christmas or making plans of their own, Air Canada is planning to add to your flight options with a second flight starting in December.

In their updated timetable, the national carrier which is the only scheduled airline to serve the Digby Island Airport will see two flights to and from Prince Rupert as of December 1st.

Towards the start of the twice a day service, there will be a few shuffles of the flight plans for Prince Rupert, with the daily flight through November moving to a morning flight, the current afternoon option to cease it would appear on November  1st. 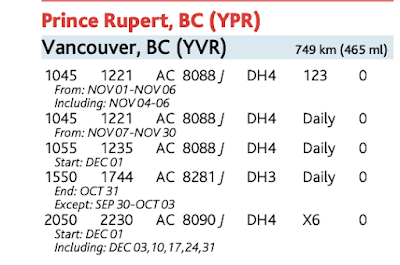 The arrival of the second flight, something that residents had been asking about since the Air Service returned earlier this year, comes just as the winter weather is set to arrive, something which makes the option of flying out of Terrace a bit more challenging depending on the weather systems of the Northwest.

Making use of the Terrace airport and its larger flight options is something that a number of Prince Rupert residents have long taken advantage of and especially so when travellers had no choice during the suspended service to the North Coast earlier this year.

It's also a shift that has been seen as part of the growing volume of passenger levels at the Terrace facility this year, though a count still well below pre pandemic times, a theme explored as part of our Air Transportation Archive which we offer a link to at the bottom of this post.

The increase of flight movements at the Digby Island Airport will also be welcomed by the City of Prince Rupert, at last weeks City Council Session, the City's Chief Financial Officer's report made note of the impact of COVID on the Airport Ferry operations.

With Corinne Bomben noting of the challenges found on the Digby Island Ferry through the Financial Variance Report for the month of July, those figures showed Year to Date Expenditures for the Ferry of $1,056,308 while Revenues realized so far in 2021 are just $58,160. 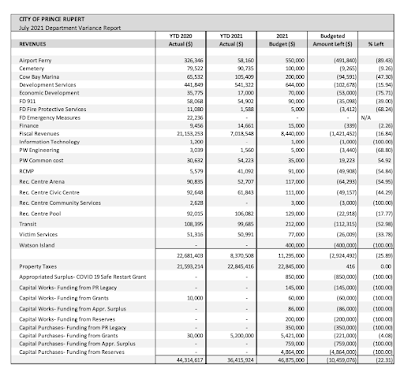 At the Monday Council session Ms. Bomben noted of the COVID funding from the province that is available for the impact of COVID on the city's financials for the airport.

"The reopening of services previously put on hold due to COVID, has resulted in an increase in revenues particularly the Airport Ferry, however it has been slow over the course of July. As communicated during Budget Season the safe restart grant funds are eligible to address shortfalls related to the pandemic" -- City of Prince Rupert CFO Corinne Bomben

The topic of the Prince Rupert Airport is not one which the members of Prince Rupert  City Council has spoken of much in recent months, though the prospect of inviting Airport officials to Council Chambers for a public briefing on all things aviation in Prince Rupert is something that has been suggested more than few times in the past number of years.

Though it's an initiative for some information sharing on the Airport situation that has not as of yet been taken up by the Council membership.

More on air transportation across the Northwest can be explored here.