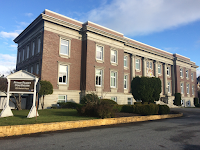 A long running investigation and court case wrapped up at the Prince Rupert Courthouse on Wednesday and a plea of guilty by Canadian National Railway has resulted in a significant fine for the national railway which services the Port of Prince Rupert,

The case was related  to an August 28th, 2017 incident with saw enforcement officers observe the railroad engaged in a spraying operation  on the rail corridor between Terrace and Prince Rupert.

The subsequent investigation and laying of environmental charges brought the matter to court  and today the Federal Environment and Climate Action office announced the fine that has been levied, as well as some background to the incident.

On September 15, 2021, Canadian National Railway Company (CN Rail) pleaded guilty in Prince Rupert Provincial Court to a charge of violating subsection 36(3) of the Fisheries Act in relation to the deposit of pesticides in or around waters frequented by fish. The company was fined $2.5 million, which will be directed to the Government of Canada’s Environmental Damages Fund.

On August 28, 2017, ECCC enforcement officers observed a spray truck discharging a mist as it travelled along the rail corridor between Terrace and Prince Rupert in British Columbia. Because the rail corridor runs along the Skeena River and over many tributaries and wetlands, officers conducted an inspection to verify compliance with the Fisheries Act. The subsequent inspection and investigation confirmed that the pesticides sprayed along the rail line were deleterious (harmful) to fish.

With the guilty plea delivered and the case now settled, Canadian National Railway will be added to the Environmental Offenders Registry.

The full statement from the Federal Environment agency can be reviewed here.

Some of our past notes on the incident in question can be reviewed below:

For more notes related to CN operations in the region see our archive page here.