Down a team and with a new schedule revision, the Prince Rupert Rampage and CIHL make ready to hit the ice in October

Hockey fans in the Northwest and Cariboo Regions are counting down the days til the hometown team hits the ice with the Central Interior Hockey League only a few weeks away from a return to action following a years absence from the cancelled 2020-21 season.

As the league returns they have added one team in the Nechako area, while hearing word of a one year sabbatical for the entry from the Bulkley Valley.

As we noted  on September 14th, the Smithers Steelheads have made the tough decision to sit out a year, citing the many circumstances surrounding COVID towards their one year break

When it comes to hometown side for the North Coast, the Prince Rupert Rampage will hit the ice on October 16th launching the Fourteen game schedule and hosting the first of their seven home dates for the year.

Opening night set to be a memorable beyond the hockey with the Rampage to pay tribute to their long time trainer Jules Robinson on the night, Mr. Robinson having passed away earlier this year.

The October 16th game will also provide the Rampage opportunity to observe the Every Child Matters movement, asking fans to wear Orange to the rink that night, or to purchase Orange Rampage tee shirts by donation towards charity. 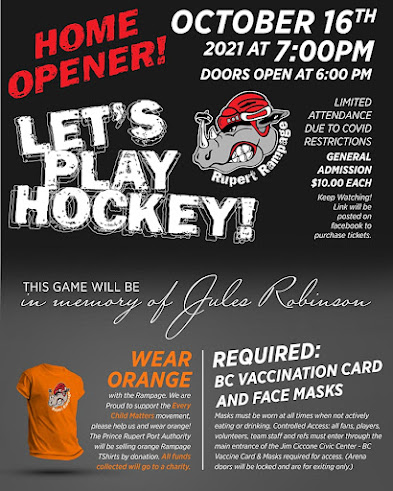 With the home Opener behind them, the Rampage will see Hazelton and Vanderhoof/Fort St. James fill out the guest list for the start of the season as part of the three game homestead before their first road trips of the year which come on November 16th.

That's when Prince Rupert's Rhinos board the bus and head for Kitimat, followed by the always challenging trek into the Cariboo with games November 13 and 14 in Williams Lake and Quesnel respectively.

One of the strongest rivalries for the Rampage will ramp up again on November 27th when the Terrace River Kings head down Highway 16 for their fist drop into the Jim in over a couple of year.

That marks the last home game for Prince Rupert until the end of January, with the Rhinos embarking on a four game road journey starting on January 8th, they will travel to Fort St James, Terrace, Hazelton and Kitimat before returning to the friendly confines of their McBride Street home.

The push for the playoffs starts January 28th when the Rampage host Quesnel, with Williams Lake in town the following day.

The Regular season wraps up February 5th with another visit by the Terrace River Kings.

For CIHL fans across the Highway 16 corridor and into the Cariboo the full CIHL schedule is available below, the draft still featuring what would have been the Steelheads season, entries which should disregard it would seem.

When it comes to the game day experience at the Jim, capacity is limited to a cap of 500 fans, that owing to COVID measures for the season. And there are COVID protocols required of fans including proof of vaccination and mask wearing while inside the Jim Ciccone Civic Centre.

You can buy tickets through The Prince Rupert Rampage Facebook Page which has this link to the opening night match up between the Ice Demons and the Rampage.

Keep our archive page bookmarked for all the latest notes from the CIHL from the North Coast on into the Cariboo.