The testimony of Wednesday by the Prime Minister's once principle secretary Gerald Butts seemingly did little to temper down the political heat on the Liberal government, with calls continuing for a public inquiry, as well as other measures into the details of the SNC-Lavalin affair in the nations capital.

Wednesday Mr. Butts appeared in front of the Justice Committee of the House of Commons and knitted a narrative to the events somewhat different to that of former Justice Minister and Attorney General Jody Wilson-Raybould.

The former principle secretary faced a range of questions from the panel of committee members and for the most part stayed true to the message that has come out of the Prime Minister's office in the last few weeks.

That of misunderstanding and job protection as the main themes to a month long period of turmoil for the federal leader and his cabinet.

The testimony of both Mr. Butts and the Clerk of the Privy Council Michael Wernick seemed to leave more questions at the table than they solved, with Mr. Wernick at times seemingly channeling Jack Nicholson from a Few Good Men as his role model for testimony, frequently clashing with the opposition members of the panel. 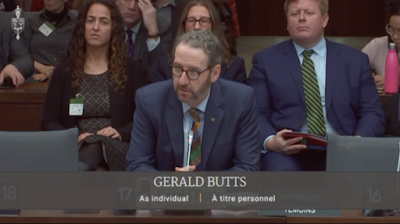 The one main takeaway from the day of testimony being that neither of the witnesses ever seemed to explain why it was deemed necessary in the first place to move Ms. Raybould-Wilson from her position in Cabinet in mid January, a move that sent up the first flare for the media that something was not quite what it seemed in Ottawa.

Mr. Butts also raised a few eyebrows when he suggested that he had been surprised that Ms. Wilson-Raybould had turned down a shift to the Ministry of Indigenous Services; even though it appears to be common knowledge around Ottawa that she had long observed that was not a post that she believed would make for the best use of her talents.

Things weren't helped much by a partisan vote on the committee that chose not to recall Ms. Wilson-Raybould to answer to the testimony of Wednesday, leaving many of the issues noted by the panel still unresolved.

The themes that the two witnesses pursued Wednesday, haven't done much to sway the opposition Conservatives or NDP members of Parliament, the Tories have continued their call for an RCMP investigation, while the NDP continue to urge the government to call a Public Inquiry into all of the elements of the political drama that has captured the news cycle since the middle of January.

Towards that goal and even before yesterday's testimony in Ottawa, Skeena-Bulkley Valley MP Nathan Cullen had shared the details on the NDP call through his facebook page, urging his followers to sign on to the petition to build up the momentum for the inquiry. 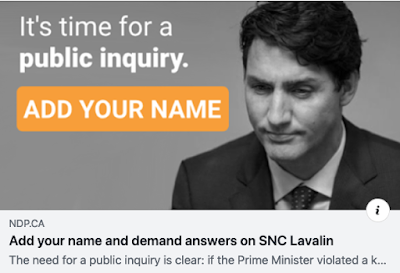 This morning the Prime Minister, held his first extended media conference on the issue that has taken his government far off its message and has rattled the Liberal party's approval ratings in the polls, something that offers a cautious warning for the fall election ahead.

The early morning conversation with the media caught the attention of the Skeena-Bulkley Valley MP who offered up some thoughts on how he viewed Mr. Trudeau's analysis of the situation.

The Prime Minister's lack of contrition this morning and effectively by doubling down on the approach that his inner council is advising, will most likely bring out many more calls for public inquiries, Senate oversight panels and even potential criminal investigation.

To explore the work of the Justice Committee, including video presentations of both sets of testimony from Wednesday see their information listings here.

You can review the accounts of the testimony of yesterday and that of the entire SNC-Lavalin affair through our political archive on our D'Arcy McGee portal.

Which as things would appear to be evolving will be an expanding file for the foreseeable future.

Email ThisBlogThis!Share to TwitterShare to FacebookShare to Pinterest
Labels: NDP continue calls for Public Inquiry on SNC-Lavilin and Wilson-Raybould resignation