The City of Prince Rupert is moving the process along towards securing a new tenant for their Canfisco Warehouse venture in the Rushbrook Floats area.

The City posting a Public Notice this week advising of their plans for a proposed sublease of some of their municipal property space to RONA Tyee Building Supplies.

With RONA set to gain access to 5,000 square feet of space in the George Hills Way Warehouse.

Initial terms of the lease will see RONA pay the City $32,500 per year for the term of one year, with  a one year extension.

The notice advises if you have questions concerning the property disposition, that you should contact Rosamaria Millier, Corporate Administrator at City Hall in writing.

The deadline to express any concern or comment is  no later than 4PM on December 10th.

RONA currently leases space further up George Hills Way in a property just to the east of the Yacht Club, with the notice from the City perhaps serving to lend some credence to the quickening pace of the Prince Rumour Telegraph of the last month that something is in motion towards development of land along that stretch of George Hills Way.

The percolating presumption being of a significant announcement to soon come from City Hall related to a major revisioning of that area of the city along with a potential commercial use for the light industrial area of the eastern waterfront. 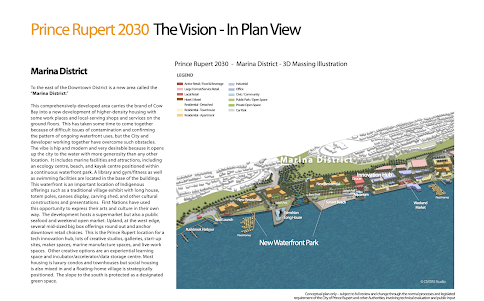 That area is part of what was identified as the Marina District during the Prince Rupert 2030 Vision presentation, when Mayor Brain and Council unveiled the view of how the Prince Rupert of the future may take shape.

That blueprint for the way forward coming by way of urban planner Larry Beasley who worked with City Council and a range of community stakeholders as part of the visioning process.

Many of the elements of the work of that period has since been incorporated into the revised Official Community Plan which was adopted earlier this year by Council.

As the old saying goes, watch this space, for future announcements.

More notes on City Council themes can be explore from our archive page here.