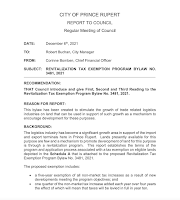 Following their blue print of a year ago when they looked to encourage development in the downtown core, Prince Rupert City Council has moved forward a plan to introduce a Tax Exemption program for industrial land use, as long as the focus is on logistics in support of Port of Prince Rupert activities.

The City's Financial Officer Corinne Bomben provided the background to the topic on Monday night, reviewing some of the elements for Council of her report that was distributed as part of the Agenda for the night. With the CFO noting how the exemption would be a mechanism to encourage growth in the Logistics sector.

"This bylaw has been created to stimulate the growth of trade related logistics industries on land that can be used in support of such growth, as a mechanism to encourage development for these purposes. Trade logistics has become a significant growth area supporting the import-export terminals in Prince Rupert. There are not many areas of lands available for these purposes and a mechanism to promote the development of land for this purpose is through a revitalization program. --CFO Corinne Bomben

Ms. Bomben noted that there is no cost to the city for the initiative, other than the opportunity costs foregone on the term of the exemption.

In follow up discussion, Councillor Mirau noted of his support for the proposal and how it supports the Ports Land Use plan and the city's own Official Community Plan.
"This bylaw is I think a good example of how the City can continue to support port related growth without a cash outlay and so obviously its consistent with the Port's long term land use plan and I think it's also consistent with our new OCP because I think it's in our collective best interests to cluster industrial development away from residential areas" -- Councillor Blair Mirau
He also asked as to whether a copy of the map noted in the Agenda was available for viewing, observing that it was missing from the document.  Towards the map, the Mayor suggested that once accessed that the map be forwarded to the digital devices of the Council membership.
However Councillor Adey noted that as the meeting was a public session, the map, if possible should be presented on the large screen in the Council chamber.
"Since this is a public meeting, I'm wondering if it should be projected for the public as well"

Once up on the screen, Ms. Bomben noted that the land in question along the Highway (later noted as the Ridley Island Access Road) was the only land of note available for such use as a logistics terminal.
In further discussion, Councillor Mirau asked as to how much of the land would be used for development, with Ms. Bomben noting only a portion of the land was available for such use.
"It's only for a section that's actually kind of developable, that anyone would be able to develop on, the lower section is not anything that can be developed on" -- CFO Bomben
Councillor Cunningham asked if there were any other properties available and he was advised this was the only one to be considered at this time. In follow up, the Mayor noted that the City could extend the tax exemption to other lands at any time.
Councillor Mirau followed up with a question on the status of land and if it would qualify under the Port Property Tax act as and eligible property, he was advised by the CFO that it would not part of that act.
Councillor Cunningham further explored what the use would be for the land, with Ms. Bomben noting that any use would have to follow the purposes of the program, with any applicant required to apply to the city and fit the guidelines.
With no further discussion Council provided First, Second and Third Reading to the Bylaw, It will return for final approval at a future Council session.
As we outlined on Monday, there are a number of logistics park proposals currently under consideration outside the scope of the City's land boundaries.
The City also has made note of the potential use of the Watson Island Logistics Park for such use, though no one spoke to that civic property on Monday evening.
The full provisions of the Property Tax Exemption plan can be explored from Monday's Agenda Package starting on page 61.  At the Monday session, Ms. Bomben noted that the Map would be included as part of that package, though as of the publishing time for this post the map has not been added to the information package.
The full conversation on the topic can be reviewed from the City's Video Archive, starting at the three minute mark.
More items of note from Monday's Council Session can be explored from our archive page.
Items of interest on Major projects and development can be reviewed from our archive here.
A wider overview of past Council discussion themes is available here.
Posted by . at 12:10 PM