One rescued, all accounted for as Prince Rupert Fire/Rescue battled downtown fire overnight

A major fire in the heart of the downtown core brought a full response from Prince Rupert Fire/Rescue, with crews from the Fist Avenue West Fire Hall attending to the blaze in the 600 block of Second Avenue West on Monday evening.

Firefighters arrived on scene shortly after 9PM and immediately conducted a rescue from the building, in addition to evacuating the remaining residents of the apartments above the commercial restaurant structure at the corner of Sixth Street and Second West.

Working through the night and into Tuesday morning, firefighters contained the fire to the immediate corner, though the ferocity of the fire was such that the building has already been demolished, with heavy equipment arriving on scene earlier this morning to reduce the structure to rubble.

Two adjoining buildings and businesses also suffered extensive damage as a result of the fire and were destroyed, the work of Prince Rupert fire did however stop the blaze before a larger swath of the historic downtown block was consumed. 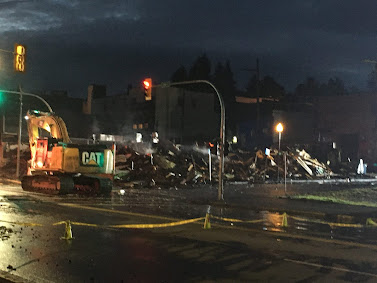 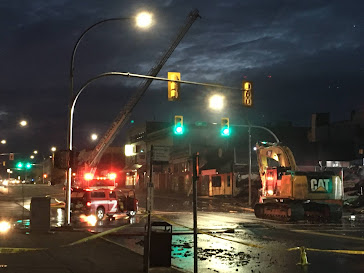 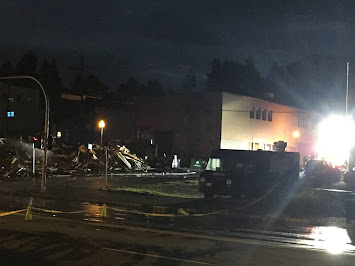 The mid-evening fire attracted a large crowd of spectators, many of whom stayed late into the night and chronicled the efforts of the Fire Department through social media posts.

No cause has been identified by Prince Rupert Fire/Rescue as of yet and there is no immediate account of how many Rupert residents living in the apartments above will now be homeless.

At this time there is no indication of any injuries suffered in relation to the incident.

Road closures remain in effect for areas around the fire scene, with Second Avenue Closed to Traffic between Fulton and Sixth Street.

Side streets in the area are also closed to traffic, much of the usual Second Avenue Traffic is using Third at the moment, making for some congestion at times along that thoroughfare.

The Prince Rupert Fire/Rescue Facebook page has an item related to the Monday evening fire, updates on the incident can be found there.

For more notes related to the work of Emergency Responders in the Northwest see our archive page here.