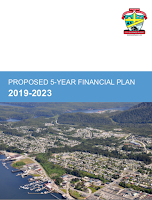 For Prince Rupert residents with thoughts or concerns related to the 2019 Budget process, this is the month to be collecting your talking points and to make your contribution to the discussion.

As we noted last week, Ms. Corinne Bomben the Chief Financial Offcier for the City outlined the details of her proposed financial plan and budget with a presentation to City Council, making for a document that reflected the Finance Department's and Council's growing confidence in the financial state of the city.

On Friday, as part of their information program, the City released to the city website a wider overview of the Five Year Plan and the City budget for 2019.

The document features a more expansive look at many of the themes from last week's financial blue print as well as letters from the Mayor, City Manager and CFO on the path ahead for the community.

To enlarge any of the highlights listed below, simply click on the element to expand the copy.

In his correspondence, Prince Rupert Mayor Lee Brain touched on a number of familiar themes from the last number of months. The forward momentum for the city's water replacement program, development of Watson Island and development of revenue streams making for the bulk of the overview. 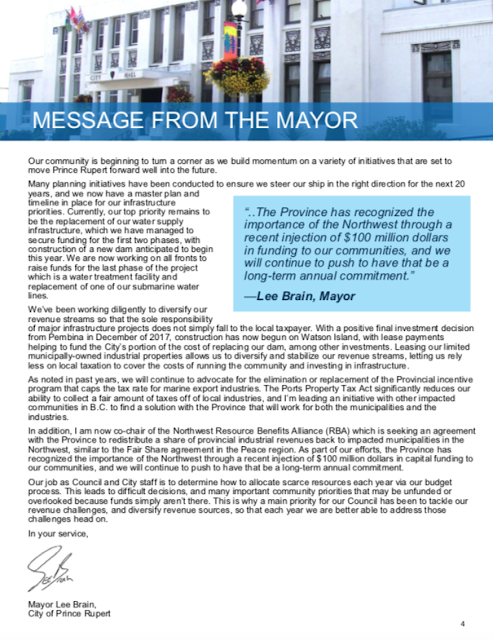 City Manager Robert Long is also quite bullish on the city's future, hailing the work of staff and council together to remove financial obstacles. He also raises a few areas of note still to be resolved, including the Ridley Island Tax Sharing Agreement with Port Edward which is still apparently much on the city's mind. 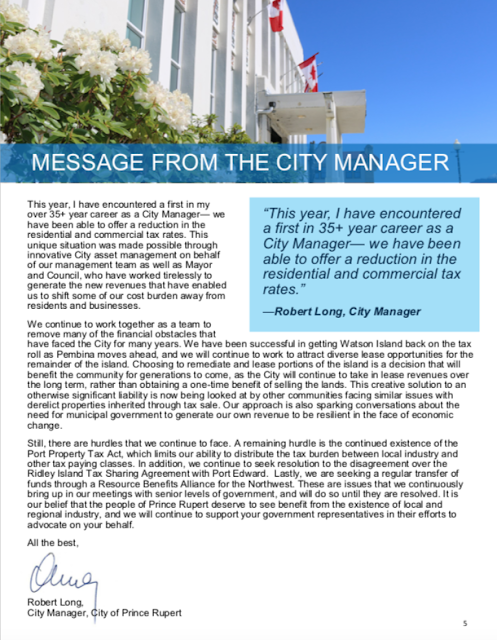 For her part, the City's CFO notes how new revenues from AltaGas and Pembina pipelines aided in the delivery of some of the financial good news as well as the opportunity to address some long standing operational deficiencies. 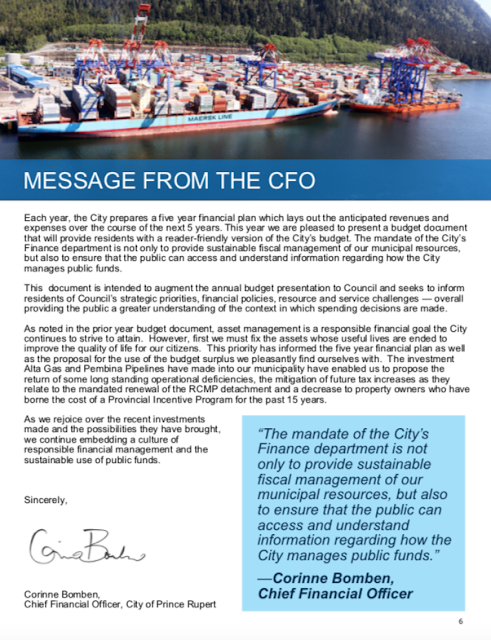 The twin themes of Watson Island and the Tax Sharing agreement with Port Edward also make for a key part of the focus of the Executive Summary of the Five Year Financial Plan.

In the summary, the City notes that their advocacy for the lease of portions of Watson Island through Prince Rupert Legacy Incorporated has been designed to provide for diverse commercial interests to bring the Island back onto the tax roll and collect lease revenues.

Though not included in all of the notes on Watson  Island is a list of any new clients for the Industrial site other than Pembina Pipelines, which continues on with its work towards development of an LPG Terminal on the property. 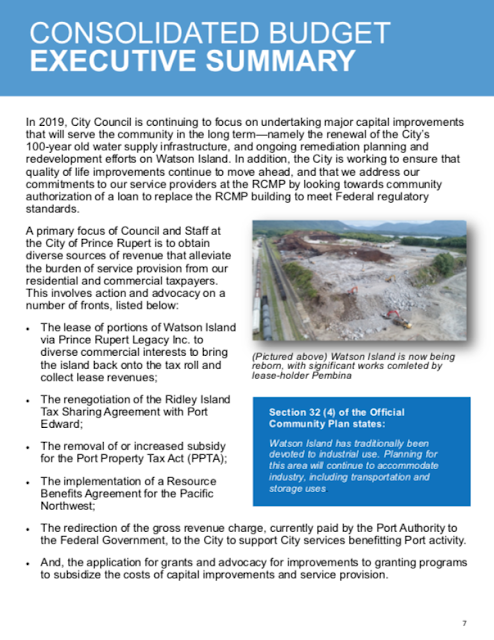 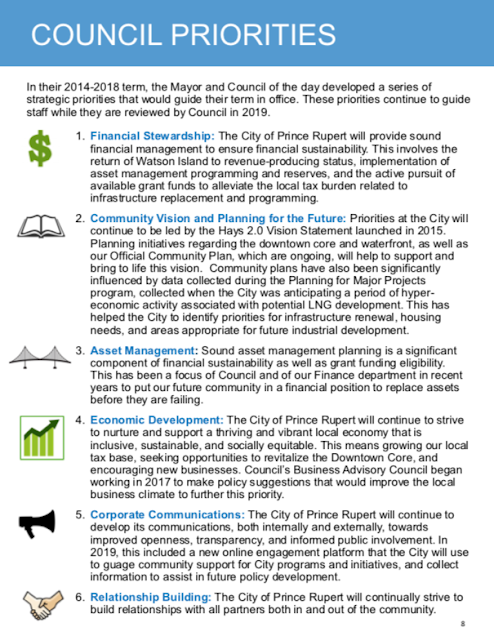 Of note from those six points, the continued dominance of the Hays 2.0 Vision Statement as the guiding policy for City Council  and a renewed focus on their communication plans which they state will work towards openness, transparency and informed public involvement.

It's a lofty goal, though at times one where they seem to stumble from time to time, the recent Boil Water issues of December and January perhaps an instructive moment for Council, which had promised to deliver a report on their handling of the situation, a document yet to be delivered in public.

Relationship building is also a goal for Council, though considering the focus the Five Year plan continues to put on the Ridley Island Tax Agreement, relations with the District of Port Edward may be a program that will need a bit more work. 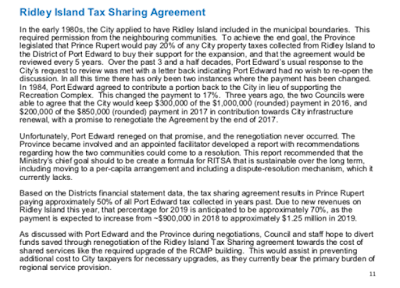 Where the City's Revenue sources come from and where they spend their money is also one of the key elements of the Report. 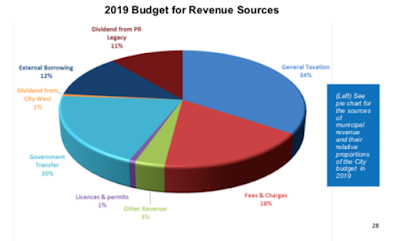 When it comes to the money coming in, Taxation still looms large at 34%, with Government Transfers accounting for 20%, Fees and Charges bring in another 18% while external borrowing 12% and Dividend from Prince Rupert Legacy deliver 11% of the budget for 2019.

Of note as a shareholder and sole owner of CityWest, the communication company only provides for 1 per cent of revenue through a dividend return to the Municipality. 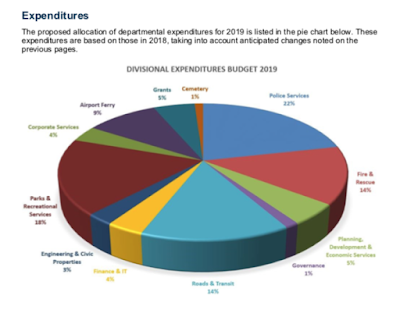 Spending the money finds the operations of the Police service from the RCMP taking up 22% of the money spent, while the Fire and Rescue service takes a 14% bite out of the budget planning. Parks and Recreation at 18% led the way of the non emergency response items, followed by Roads and Transit at 14%.

Operation of the Airport Ferry takes up 9% the 2019 plan.

The rest of the breakdown is as follows:

As for short and long term projects, 2019 will see a number of capital works programs get underway including projects at the Civic Centre, land fill site and next phase of the water supply initiative. 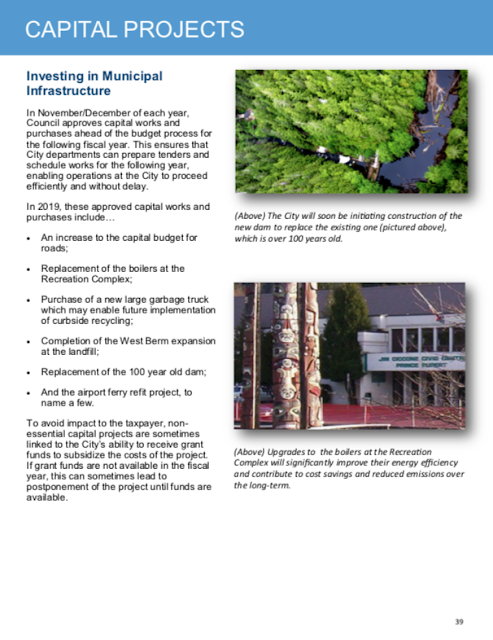 Longer term is the need to address the issue of replacement of the RCMP detachment, with the City as they have done for a few years now, reminding residents that the current detachment has been deemed inadequate by Federal standards and will need to be replaced.

Towards that plan, the City notes in its report that  a debt financing program is being proposed that would see the debt cost the City 1 million dollars annual,  the current plan is to forward a loan authorization bylaw in 2020, which if successful would see a new facility in service by 2023. 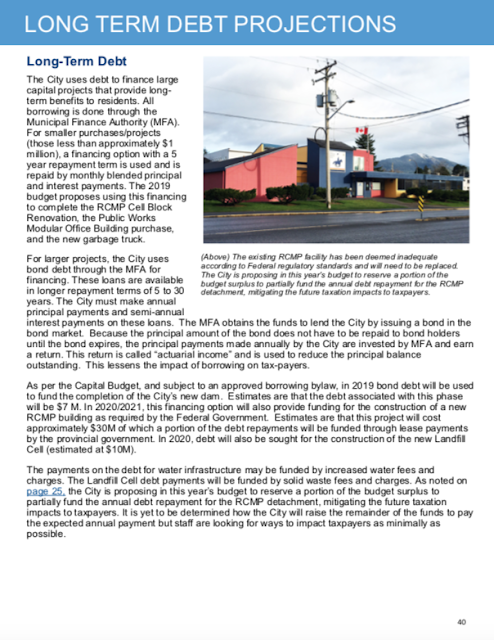 Part of Ms. Bomben's presentation included the welcome news of a tax reduction for 2019, with residents and business owners to see a 2% cut in the tax rate for the year ahead. Still, as the chart included in the City's presentation shows, the City of Prince Rupert is still among the highest level of municipal taxation in the Northwest. 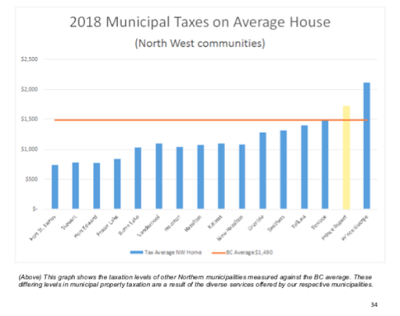 The full Five Year Plan can be reviewed here.

Residents will have two opportunities to share their comments with the Council members as they prepare to move the financial planning forward.

The two public comment periods have been folded into the Regular Council meetings of March 11 and 25, they will be the only public opportunities for input and guidance for council as to how residents may wish to see their money spent.

As part of the Budget process residents will also have opportunity to offer up comments related to the findings of the Standing Select Committee on Council remuneration, which also delivered its report and call for pay raises for the mayor and council at last Monday's council session.

So far, the City has not posted a document on that theme similar to the impressive work of the Budget presentation of Friday.

If Staff and Council wish to fully explore the salary themes with the public  a report in much the same spirit as the Finance document, is something that would serve the city well in their information sharing campaign.

For more items of note on the Budget process see our archive page here.

A wider overview of City Council discussion themes can be explored from our Council Discussion page.

Email ThisBlogThis!Share to TwitterShare to FacebookShare to Pinterest
Labels: Budget documentation for 2019