A Vancouver press conference Monday afternoon,  provided for the latest notes of alarm on the dire fate of those involved in the Pacific fishing industry as union representatives and those from First Nations spoke to what has been described as the unfolding disaster in the salmon industry and the economic hardship that is being delivered.

The event which was hosted by Unifor-UFAWU provided for a range of speakers to highlight the ongoing struggles for those working in the Pacific fishery and the  impact that this season in particular has had on their livelihoods and families.

Among the collective to speak to the issue on Monday were Joy Thorkelson, President of the United Fishermen and Allied Workers' Union and John Helin, the current Mayor of Lax Kw'alaams and a former gillnetter.

Ms. Thorkelson noted noted that the numbers of fish caught this year are fare below normal and highlighted that many of the licence holders have not taken their boats out to fish at all this year.

For his part, Mayor Helin observed how the lack of salmon has put pressure on other species of fish which has resulted in a decline in their numbers as well.

Highlighting the struggles that this season has provided for was Gavin McGarrigle, the Western Regional Director for Unifor who had some stark words about this season.

“Small coastal communities are suffering from the worst commercial fishing season in fifty years. No matter the region and no matter the salmon species, runs have plummeted. It’s a crisis and governments must act to support workers and their communities.”

The information conference was organized as the fish returns, such as they are, begin to come in for the southern fishery and like much of the year for the Skeena and Nass, those returns are providing a portrait of a fishery facing some serious decline.

Both in returning fish stock and opportunity to make a living in what was once the backbone of the BC economy.

The media conference comes after the local Unifor office released a reply yesterday, to a recent correspondence from the Fisheries Minister Jonathan Wilkinson.

In his reply to the union he observed that "the request for compensation goes beyond DFO's mandate", he did state that he would pass the correspondence on to his cabinet colleagues.

As a parting thought in his correspondence, the Minister did note of the programs that are offered to "provide opportunity for harvesters to exit the industry" 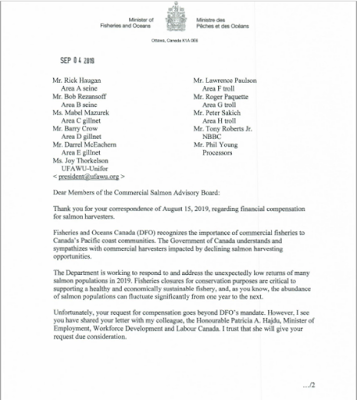 The local workforce and their families may soon get some moral support from Prince Rupert City Council which so far this salmon season has not addressed the percolating fishery crisis that will have an impact on both the economy and the needs of those impacted by the lack of employment generated from the troubled year.

At last night's Council session, Councillor Nick Adey provided some thoughts on the state of the current fishing season and offered up the suggestion that Council should invite Ms. Thorkelson to one of their October sessions to outline the troubles facing the Prince Rupert workers and their families.

The Councillor also put forward for consideration that council may want to give consideration towards writing a letter of support in answer of their call to Ottawa for financial assistance and more attention to the issues that have come out of this fishing season.

Regular readers of the blog will remember some of our previous notes on the Unifor-Ufawu warnings from the summer and into this month, a review of those notes can be found below:


For more items of interest on the state of the fishery and the fishing industry see our archive page here.
Posted by . at 9:29 AM

Email ThisBlogThis!Share to TwitterShare to FacebookShare to Pinterest
Labels: Calls for fishery assistance so far not finding much success